The Bhutanese people are slowly beginning to realize that the hydropower projects will, over time, not only ruin our environment but will also be the cause of the loss of our nationhood. Some Bhutanese contractors working on the Punasangchu projects are already admitting that they are being “raped”.

To me it is clear that we will be losing money over these hydropower projects: simply because too many mistakes have been made as a result of which the project is costing us more than the revenue it is likely to generate. And we are not talking of other costs - such as political and environmental. I doubt if we will be able to service the loans obtained from India - for these projects. This is likely to force us to remain perennially in debt - to India. Is this the result of incompetence? Poor design? Poor management? Or, something else?

I have said this before: WE NEED TO STOP HERE or we are DOOMED! Am I wrong? May be - but time will tell.

Anyway, this post is not about hydro-power projects. I think I have made enough noise and, as always, nothing is going to come of it. Today I want to post some photos of a Kingfisher fishing for fish - in Berti, Zhemgang.

I am convinced, as other environmentalists are, that as a result of the Punasangchu and other hydropower projects, one of Bhutan’s rarest birds and a star attraction for visiting birders - the White-bellied Herons (Ardea insignis) are being imperiled. There is a real danger of these birds going extinct - as a result of their habitat being destroyed by these hydro-power projects.

There is nothing I can do for these birds - but bring their plight to the notice of the government. I had heard that there is a small community of these birds living in Berti, Zhemgang - so I visited the place to see how secure the habitat was - for these birds to continue to live and thrive in the area. I am glad that the place is very well suited to these birds and there is hardly any human activity in the areas where they live. I have been spreading the word that since Punasangchu area (the most important Heron habitat in Bhutan) is going to be lost to these birds, we should declare that patch of area in Berti as Heron sanctuary. For a country that is known world over as a champion of conservation, it would be shameful if we allow these birds to go extinct.

For the record, Bhutan boasts the highest number of these rarest of rare Herons. On last enumeration, we have 28 of these birds. The world population of these birds are said to be any where from 50 to 200 birds.

I was seated by the riverbank - waiting for the Herons to show up. After a while, I noticed that a cute little Common Kingfisher (Alcedo atthis) had landed on a boulder at a distance. He than began a series of dives to catch himself some fish. The following series of photos show the cute fellow at work:

He is scanning the pool of water for fish. 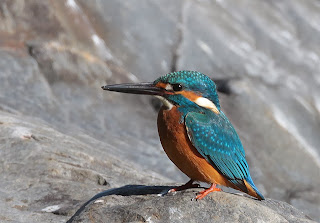 He sees that there is plenty of fish in the shallow water in front of him. This day he will certainly not go hungry! He takes flight and hovers over the pool of water before he dives to catch a fish. 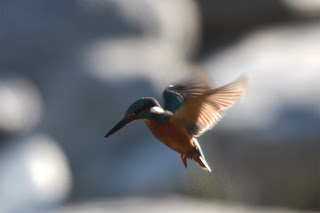 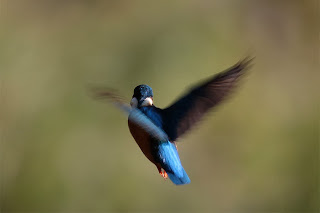 He has a fish! 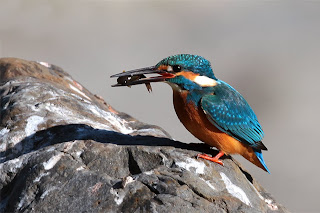 The fish struggles to free itself from the beaks of the bird. No Chance! 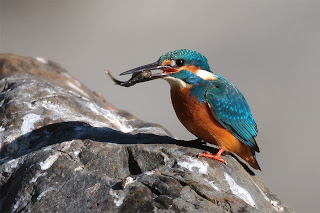 The fish is still wriggling. 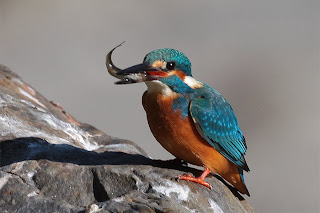 After a while, the fish is dead. 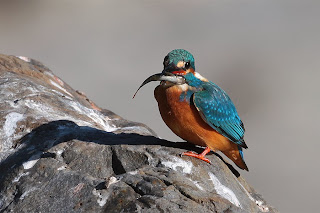 The bird than swallows the fish - whole! 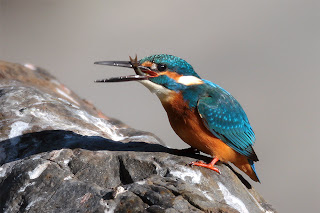 He lets out a satisfied BURP! 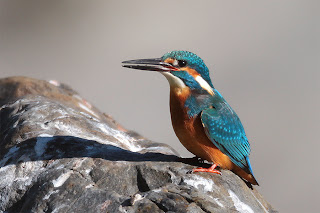 The bird then flies off to perch on a tree branch - closes his eyes and dozes off for a afternoon siesta. He will wake up after about an hour and start the process - all over again.

Email ThisBlogThis!Share to TwitterShare to FacebookShare to Pinterest
Labels: Environment