Our government and public officials are putting out alarming numbers, surrounding our hydro-power projects.

The Kuensel says Bhutan earned Nu.13.03 billion from export of electricity, during the year 2016.

As opposed to that, Lyonpo Leki, Economic Affairs Minister says that the combined loss from the two PHEPE projects amount to a whopping Nu. 38.00 billion, for every year the projects are delayed. 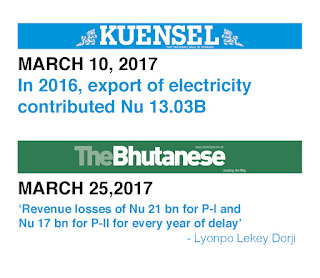 The revenue loss from these two projects is almost three times the revenue we earned from export of electricity. So the question I asked in my last post is still valid:

How much more loss do we need?