When I first joined the Bank of Bhutan in 1971 (one day I will give you an account of how I, still an underage, managed to get employment in a government entity when the rules forbade it), Bhutan did not have paper currency - our legal tender was Tikchung - denominated at 50 Chettrums. Imagine transecting in thousands of Thalas! The Tikchungs used to be bagged in pouches made of cloth - and carted off into the bank’s currency vault on steel trolleys - pulled and heaved by muscular guards - at the end of each day! For the bank's cashiers - counting the Tikchungs was a nightmare. Unfortunately, there was no escape from the daily End-of-Day (EoD) reconciliation routine.

During those primeval days, we used wooden troughs that had hundreds of indentations the circumference of a Thala. We would pour bags of Thalas into the trough and spread them across the trough, to count the Tikchungs. The Thalas would snap into the indentations - excess Thalas would be removed ---- each trough had a set number of Thalas…. Phew!!! It was daunting. The Tikchung counting troughs looked like this:

There were also one or two units of coin counting machines, most likely imported from the UK by the BoB’s first Managing Director – Mr. Holms whom I never met because he had died in a car accident by the time I joined the BoB. Mr. Holms was from the Chartered Bank of India (which later became Standard Chartered). After Mr. Holms, all the CEO's of the Bank of Bhutan were from the State Bank of India - this is no longer true. 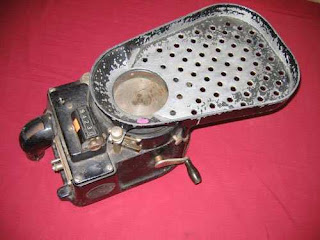 I recall vividly that the salaries of the RBA personnel posted in the border areas used to be carted on the backs of ponies.

In the absence of a Central Bank, our currency notes were initially guaranteed first by the Ministry of Finance, then by the Bank of Bhutan and, finally, by the Royal Monetary Authority, as of early 80’s to date. A country’s legal tender is a Promissory Note - thus needs to be validated with a signed promise to guarantee the bearer the payment of the sum denominated in the note. Thus, our currency notes carried the signatures of, in order of listing, His Majesty’s Representative in the Ministry of Finance, the Finance Minister, the Deputy Managing Director of the Bank of Bhutan and, finally, by the successive Governors of the Royal Monetary Authority of Bhutan. 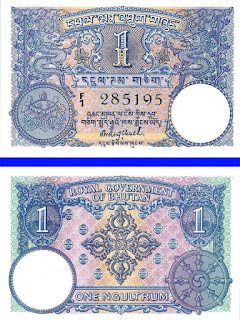 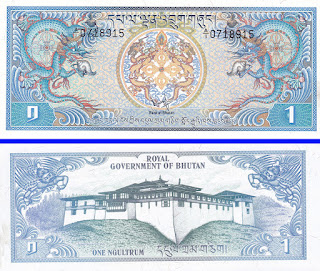 Subsequent releases of the Nu.1.00 currency notes bore the signature of Mr. Yeshey Dorji, Deputy Managing Director of the Bank of Bhutan 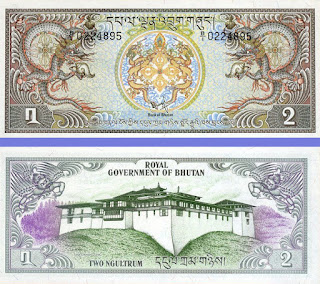 Nu. 2.00 currency notes, also signed by the Deputy Managing Director of the Bank of Bhutan 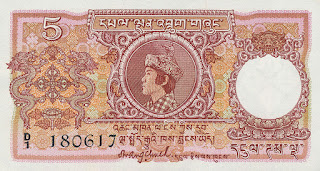 Nu.5.00 currency note signed by HRH Ashi S C Wangchuck, His Majesty's Representative in the Ministry of Finance. This may be among the first series of Nu. 5.00 notes released during June of 1974 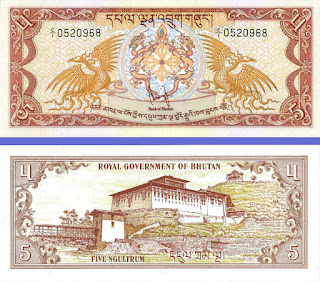 The subsequent Nu. 5.00 currency notes bore the signature of the Deputy Managing Director of the Bank of Bhutan, Mr. Yeshey Dorji 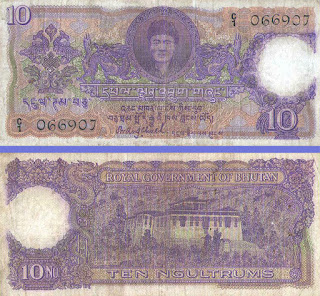 Nu. 10.00 currency notes bearing the signature of HRH Ashi S C Wangchuck, His Majesty's Representative in the Ministry of Finance. This could be the earliest series of Nu. 10.00 notes

Nu. 50.00 currency note bearing the signature of the Chairman of the RMA - the Finance Minister. It is my understanding that he signed in his capacity as the Chairman of RMA - because although the RMA was created in 1982, it did not yet exist as a functioning organization. The Central Bank took over the note issuing authority only in 1983. Thus I have to assume that the note must have been issued between the years 1978 - 1982

The following is a little known but not very funny piece of history surrounding our currency notes.

One fine morning in 1979, Mr. Yeshey Dorji, the then Deputy Managing Director of the Bank of Bhutan arrived London, for a training course. He went to the Berkley’s Bank to convert his US$ currency notes into British Pounds. Quite promptly and without much ado, he was picked up by personnel of Her Majesty’s London Police Department and unceremoniously lodged into London jail. The reason:

Pronounced guilty of being in possession of FORGED CURRENCY NOTES!

Not very funny actually - considering that Mr. Yeshey Dorji was one of the signatories of our currency notes! Imagine!! Much later, the Barkley Bank's officials apologized to Mr. Yeshey Dorji - since it turned out that the currencies that were supposedly fakes, were actually genuine stuff.

CHANGING WORDS OF THE PROMISE
The initial versions of the currency notes released during June of 1974 carried the following declarations:

Subsequent versions made the following promise: