More than seven years back, oblivious to an epochal event that was unfolding in Thimphu, I was photographing birds in the jungles of Yongkala, Mongar, Eastern Bhutan. The April month is good for birding - obviously it was also determined that the month is good for establishing new institutions. It was on the 24th of April, 2012 that the Royal Government of Bhutan established the Rotary Club of Thimphu, the one and only Rotary Club in Bhutan.

The entire cost of the formation of the Club, including the cost of hosting the Rotary International dignitaries and expenses for the Club’s Charter gala dinner was borne by the RGoB. In fact the Charter President of the Club was the then Home Minister, Lyonpo Minjur Dorji. Please read all about it at:

To this day I do not know which charlatan proposed my name as a Member. But I have no regrets – my time with the Rotary has been, and continues to be fulfilling. I have served as the Club’s Secretary for the past four RI years.

Since its Charter in April, 2012, the Rotary Club of Thimphu has grown into an organization that has implemented service projects in access of Nu.125.00 million. Our projects have been so meaningful that the then Home Minister Lyonpo Dawa Gyaltshen once told me;

“Yeshey please do not hesitate to come to me for any support your Club needs. For me the Rotary Club is even more important than a government department”.

Our Club’s services to the society have been recognized beyond our borders. A none-Rotarian in the US appreciates our work so much that she has bequeathed a portion of her estate to the Rotary Club of Thimphu.

The Club has 28 Members as of this year. Year after year, I have put in 14-15 hours of work for the cause of the Club. Now I need a little rest – I deserve it. Thus I will be resigning as the Club’s perennial Secretary, as of June end, 2020. I know that there are other Members who are as keen, and as able, to take over the responsibilities of a Club Secretary. A change of guard is called for. It is proper that other Members too must do their time for the Club and the Bhutanese society.

So far everything is hunky-dory with the Club. But there has been one thing that I have been displeased with – the Club’s Sunshine Collection Box. If there is one thing I wanted to do before my departure, it is that I wanted to improve the look of the Box that takes the seat of prominence – bang in front of the Club President and the Club Secretary, at every Friday Meeting. I have now fulfilled that wish – after working on it for 2 full weeks, the Club’s Sunshine Collection Box has received a complete makeover. 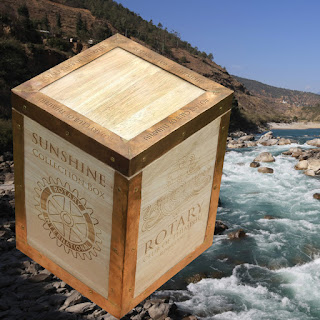 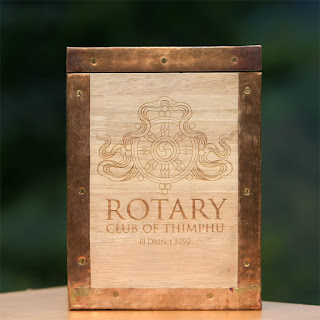 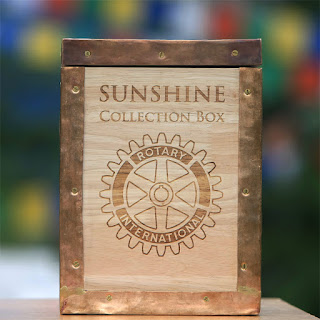 The Sunshine Collection Box that I lovingly constructed for the Club will serve as a demonstration of my love and care for my Club that I will continue to serve and cherish.

What is a Sunshine Collection Box:
At the end of every weekly Meeting on Friday, Members contribute a minimum of Nu.100.00 into the box. If there are visiting Rotarians, they do too. This money goes to pay for the refreshment  that is served during the Meetings.