I have been chasing this long shot of the mighty Gungchen Taag (6,784 Mtrs.). Finally this morning I managed to get the shot that I would say is closest to what I have in mind. This morning was the 7th attempt.

I have been to the base of this mighty peak – and got snowed in and stranded for a total of 5 days. I was camped at a place called Lingmithang – about 2 hours trek from Laya village. But I could never get the shot I liked. The following is the best image of the peak I could get from Lingmithang – not quite to my liking. 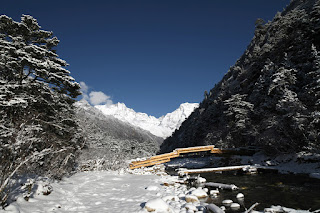 Taking a picture of the peak itself I could do – from a number of locations. However I wanted something interesting to be included in the image. Looking around I realized that if I could locate the right location and height from where to shoot – I could include Nobgang Monastery in the scene. That is precisely what I managed to do in the following scene. 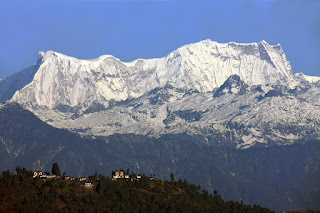 According to the weather forecast, we are supposed to have 3 clear, rainless days. So I headed for Punakha and reached the location from where to shoot – by 6.30AM, only to find that entire Wangdue valley and the Lhakhang was blanketed under a thick layer of mist. 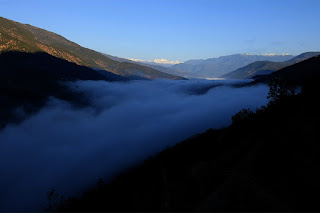 Wangdue valley completely hidden under a blanket of mist

PS: Few would recognize that this shot was of Wangdue valley. To make sure that readers would see that this was indeed in Wangdue, I moved to a different location so that I could include the two iconic Wind Turbines in the frame. With this there should be no doubt as to where the shot was acquired. This lesson is intended for those of you who are serious photographers - the photographs must speak for themselves. 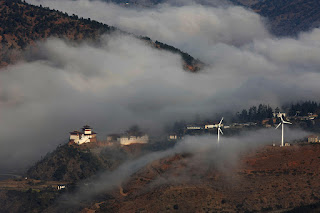 Damn!!! The weather forecast was accurate about clear skies – but nothing was mentioned about the rising mist. Well, nothing to do but wait. The mist cleared up after nearly 2 hours and I began shooting. The image of the mighty Gungchen Taag with Nobgang Monastery in the foreground was shot exactly at 8:13 AM this morning.

People only see the beautiful images – they are clueless about the pains that go behind acquiring the images.