Coins Of The Man Of Destiny

Having delved deep into Bhutan’s close to two and half centuries of coining journey, I began to grasp the true measure of men of destiny - why they are so uncommon among the common.

From 1790 to until the advent of monarchy in 1907, a multitude of Druk Desis, Penlops and Dzongpens hammered hundreds of thousands of coins in base metal, copper, bronze and silver - some even gold washed. But what is common among all those coins is that their design was borrowed from Cooch Behar’s Narayani coins, including, shamefully, some Bengali/Assamese alphabets.

That all seems to have changed - upon Gongsar Ugyen Wangchuck’s visit to Calcutta in 1906 when he is supposed to have ordered machined coin dies with the India Government Mint, Calcutta. The quality of coin strikings improved dramatically thereafter. But even more important, from 1907 onwards, our coins were shorn of Narayani coin designs and alphabets. As the following example will illustrate, with the beginning of the monarchy, the motifs on our coins were entirely Bhutanese.

We as a sovereign nation state seems to have come of age.

Unfortunately, I also notice that there are mistakes in the positioning of the motifs on the coins. Obviously the Indians at the Calcutta Mint did not know how to correctly position the motifs. As you can see, the motif “Gyeltshen” on the following coin to the left is wrongly positioned. It should have been positioned like the one to the right: 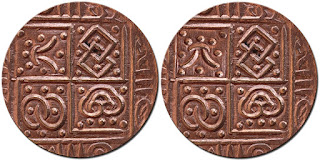 The wholly Bhutanese motifs depicted on the coins encased within a Swastika are as follows: 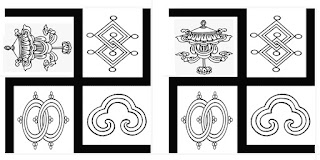 The interpretation of the motifs are as follows: 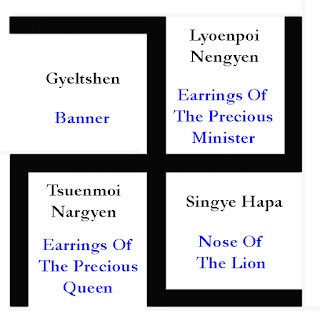 The following coin also shows two of the motifs being positioned wrongly: 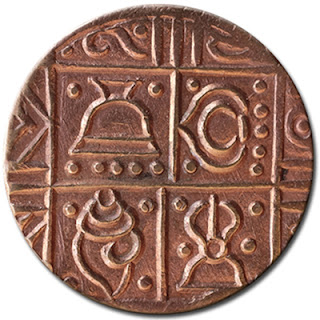 They should have been positioned as follows: 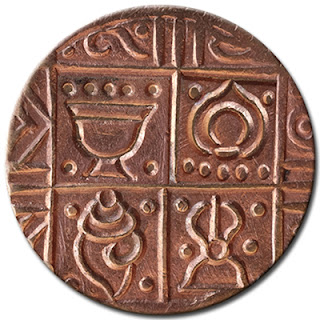 The errors ofcoure do not end here - as I had mentioned in one of my earlier posts on the subject, the mistakes occurred even in our milled coins of silver and nickel of 1928, 1929 and 1954.

For a while I was undecided whether the above coins belonged to someone else - other than Gongsar Ugyen Wangchuck. But when I looked at the design of one of his other, even more significant coins, I am now in no doubt that the above coins are his.