Historical reports show that striking of coins in Bhutan existed as far back as  1790. Of the huge variety of coins that were struck, the “Sa” coins – hammered coins with the word “Sa” is credited with the Wangchuck Dynasty. For the record, when I refer to the Wangchuck Dynasty I am also including the period when Jigme Namgyal became Trongsa Penlop.

The following are few of the many variations of “Sa” coins that would have been struck by Trongsa Penlop Jigme Namgyal, and later on by his successor Druk Gyalpo Ugyen Wangchuck, followed by His Majesty the Second King Jigme Wangchuck. 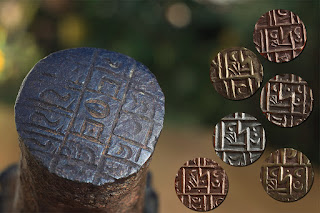 The Coin Die on the left above belonged to Druk Desi Kiptsep Dorji Namgyal. This die is currently in the possession of the Desi's descendants. The hammered coins on the right depict a variety of design variations but all bearing the mark "Sa" credited with the Wangchuck Dynasty

It is difficult to say which of the many Penlops and Druk Desi’s hammered which coins. But one coin that can be identified with Daga Penlop is the following:

One of Daga Penlop's many hammered coins

Other earliest hammered coins are the following: 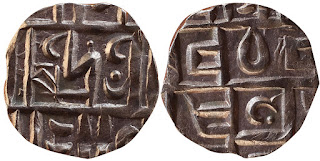 This coin is supposedly from the year 1790 - 1840. Strangely it has a "Sa" marked on its obverse. If this is true then there is something wrong with the recorded history. 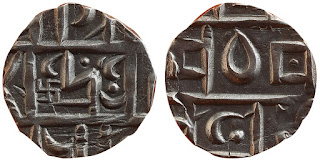 The following coins may be the last of the coins hammered by the Wangchuck Dynasty - before the milled coins were introduced in 1928 and there after. However, Nicholas Rhodes who is an authority of repute in matters related to Bhutanese coins wrote that even after the Wangchuck Dynasty came into being as of 1907, there were two other persons who retained the authority to officially strike their own coins - Paro Penlop Tshering Penjor and Gongzim Ugyen Dorji. Of the two, Paro Penlop Tshering Penjor was said to be a very artistic person. Thus, given the artistry of the coins' designs, Rhodes believed that the following coins could have been struck by him. But nothing is certain any more. 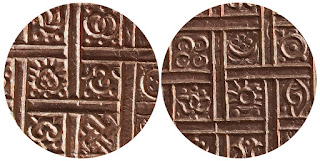 As of 1927, Bhutan stopped hammering coins. Instead milled coins came into being - initiated by the Second King Jigme Wangchuck. Two of the earliest milled coins were the following: 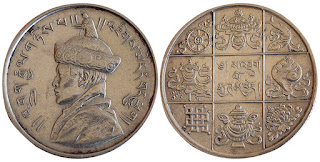 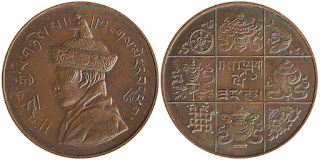 Bronze Zangtrum of 1928 - two sizes of these coins were issued