The news report in the BBS few days back concerning the departure of Cordyceps collectors into the alpine regions of Northern Bhutan came as a bolt from the blue. This is a terribly worrisome news. And yet, it would be unfair to disallow collection of Cordyceps that is the livelihood for thousands of families living in the higher reaches of the country. But our sense of charity is one thing – safeguarding lives is another. When you pit one against the other, which should take precedence? - truly an impossible dilemma. 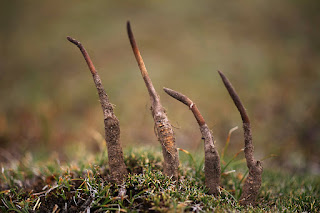 Cordyceps sinensis: the freakish half worm, half grass natural wonder that is credited with incredible medicinal properties

From what the BBS reports, the government seems to be aware of the threat associated with Cordyceps collection. But I fear that they have not yet understood the real nature of the problem of an unmonitored Northern borders, teeming with thousands of crawling collectors, at sub-zero temperatures. 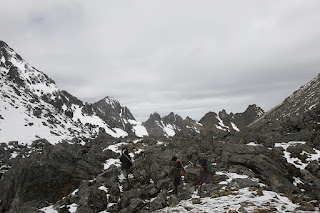 The harsh conditions in which the collection of Cordyceps happen. Not a blade of grass anywhere

Next comes the state of the health of the collectors. They are mostly in a state of undernourishment. Given the altitude at which they are camped, there are no fuel woods available for preparing meals. Thus the collectors mostly survive on Khuli and pre-packaged Noodles and Tsampa and Bokpi. Surviving on such food for months must surely play havoc with the immune system of the collectors.

Then it is the manner in which they crawl over the grounds – looking for the worms. They all huddle together – not for warmth or company – but any signs of a rich harvest ground and everybody flocks to the same spot. 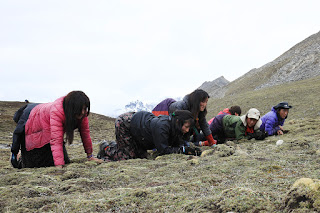 No physical distancing here - they all crawl in a group 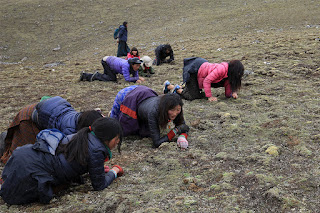 They all throng in the same patch of rich harvest ground 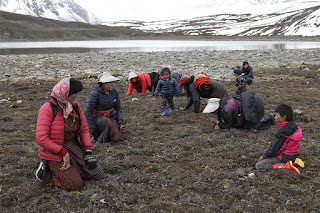 Another group of collectors in close proximity of each other

Lastly they camp in close-knit clusters. The photo below shows a cluster of 50 tents. This is in Phangu – there were two other clusters – meaning there were over 100 tents pitched in one location. Under these circumstances, if transmission happens, it will be rapid. 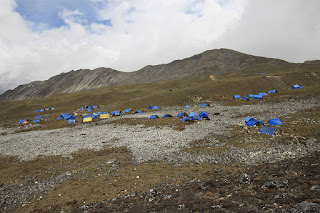 One of the three camp sites in Phangu, Lunana. This cluster of tents number 50 tents. Although during day they wonder all over the mountain tops in search of the worms, they all camp together in groups. You notice that there are no green grasses or bushes in sight - let alone trees.

I have been to Dhur in Bumthang, Phangu in Lunana and Singye Dzong in Lhuentse on photographic assignments to cover Cordyceps collection. I have seen first hand how people survive when they are out collecting Cordyceps. In Dhur I have seen families with sack loads of pre-cooked Khuli which is the only food they have – they tuck them inside their jackets and munch on them for breakfast, lunch and dinner – for months on end.

From what I hear, the government seems to be worried about the collectors sneaking over into Chinese Tibet to trade in their harvests. My view is that this should be the least of our worries. The real worry is: SEX!

During my trips to these places, my hired hands were local people with sorties to tell. One team member from Dhur and another from Laya recounted to me their experiences that are identical. They tell me that once the collection season is over, the youthful lot head for Tibet for a much deserved rest and relaxation. They hire a room each which are cheap and look for buyers for their Cordyceps. Once the worms are sold and money firmly inside their pockets, the good life begins. For the equivalent of Nu.30.00 they get to soak in the hot springs as long as they like – including a large flask of steaming hot Suja to boot. Once in a while, pretty young girls come to check on them and to provide any service that they might be in need of. And, by the by, they strike up conversations and establish amorous friendships with the young Chinese/Tibetan girls. The Bhutanese youths extend their stay by few days, then a week, then a month and then two months – until they suddenly find that they are out of money. They have been lavish with their temporary girlfriends – they buy them mobile phones, clothing and jewelry. They also buy themselves mobile phones and temporary SIMs for use during their stay there.

At last, penniless, they start for home – worried sick as to how to explain to their parents the cause for their empty pockets. Back home they are treated to sound thrashing by their fathers. But they repeat it once again, the coming season.

I asked this horseman from Laya whom I always hire for my trips to the North-Western regions:

“So why are you so stupid that you spend your entire money behind some girls in Tibet?”

His reply; “Dasho – you simply have no idea – the temptation is too powerful. I mean these nymphets are young and very pretty with long black hair – they are like Khandoms (Apsaras)! Who can resist them?”

Talking of which, are we monitoring Merak in Trashigang. That place gets lots of visitors from Arunachal Pradesh – it appears that there is pretty active cross-border trade happening there. During my trip there, I saw half a dozen of them who had come to buy sheep and booze.

I suggest that the Tourism Council of Bhutan consider deploying Trekking Guides in every cluster of camps in the Cordyceps collection areas across the country, to make sure that every evening there is roll call to ensure that every one of the collectors are resident in the camps, and has not gone traipsing across the border, in search of Khandoms.

This is no joke. Since TCB is already devising ways and means to keep the guides gainfully employed, this is one sure way of giving them employment while keeping the nation safe in the process.

AMS is serious - Thus only people with proven immunity to AMS should be sent to the collection fields. I have personally seen 3 AMS related deaths: one at Jele Dzong, Paro (an American), one at Merak, Trashigang (a government employee) and one at Roelmateng, Singye Dzong, Lhuentse (a young house wife of a Dzongkhag Administration official of Lhuentse Dzong).