In 1998, China signed a peace agreement with Bhutan to “maintain peace and tranquility on the Bhutan-China border areas”. With this epochal event, China had, for the first time in history, recognized Bhutan as a sovereign country when she stated that “China fully respects the territorial integrity and independence of Bhutan”. For a country that had declared Bhutan as one of the five fingers of Tibet - others being Ladakh, Nepal, Sikkim and Arunachal - this was a complete reversal of their earlier policy towards Bhutan. 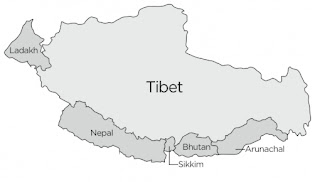 In her eagerness to resolve the long-standing border dispute with Bhutan, China - in 1996 offered a package deal under which they agreed to renounce their claim over the 495 sq. kms. of disputed land in the Pasamlung and Jakarlung valleys - in exchange for a smaller track of disputed land measuring a total of 269 sq. kms. These areas collectively known as the “Doklam Plateau” is located in the Northwestern part of Haa - perilously close to India’s peculiarly named “chicken neck” area - the Siliguri corridor that connects their Northeastern region to the rest of the country. 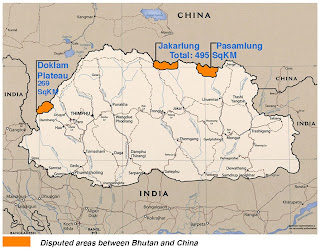 Any talk of ceding the Doklam Plateau to China causes feverish nightmares to India. That is why, when India learnt that China was sending a delegation to Bhutan for the 21st round of border talks, India promptly rushed their National Security Advisor Mr. Shivshangkar Menon to “brief” the “brand-new” Bhutanese government and to “share Indian experience and knowledge of Chinese negotiation tactics to advice Thimphu on the way forward”.

That is a whole lot of hogwash. India knows that the border talks will not be conducted or influenced by the new government team but by a select group of Bhutanese negotiators who have knowledge of the issues involved and who where part of past negotiations. Mr. Menon should not have bothered - he could have simply called up our government from the comfort of his office in New Delhi and categorically stated the Indian security concerns - Bhutan would have been happy - as in the past three decades - to do their bidding.

The article at the following link should make for interesting reading:

It is increasingly becoming clear that at the core of our troubles is: foreign policy and border dispute with China.

India made noise when we accepted the appointment of the Honorary Consul of the UK early this year. Japan is desirous of establishing an Embassy here in Thimphu in 2014. It is expected that India will not make noise in this case because the perception is that Japan and India has parallel interest in certain critical areas of foreign policy. Some overtures are being made to establish French Consular service in Bhutan - but as a member of the P5, I suspect that India will effectively block that.

Foreign relations is something Bhutan can afford to pussy foot around for a while. However, how long can we remain indecisive about our border dispute with China? How long can we endure the annual incursions from the Chinese? How much more territory must we lose before we have the courage to say enough and arrive at a settlement?

This is clearly a case of being caught between a rock and a hard place.