Portions of an article authored by Prakash Katoch titled “Dealing with Doklam” reads as follows:

“What India should do is to make an offer that China has not …….. A third possibility is that the king of Bhutan may consider selling the Doklam Plateau to India so that this bone of contention is resolved permanently. It would be prudent for the foreign policy mandarins not to let the issue lie in a state of limbo, permitting China the initiative”.

Mr. Prakash Katoch is a former Special Forces Lieutenant General of the Indian Army. This article was submitted and published on March 16, 2013.

This is the level of lunacy among the Indian Think Tank - when it comes to the issue of the Doklam Plateau. It is insane for any one to believe that a nation would sell her land to a foreign country. Even more incredible is the view that the way to solve the problem would be to ask Bhutan to sell to India the very land that is at the heart of the dispute - even while China is sitting on that very piece of land. Is there any shred of reason to think that Bhutan would be foolish enough to sell the land either to China or to India - without risking the ire of the other - with disastrous consequences? Ofcourse I realize that the views of Mr. Prakash Katoch does not represent those of the government of India - but it has to be seen from the perspective of why such an experienced and very sane and senior high ranking military officer would be driven to such insane thoughts of desperation? Make no mistake - this issue of the Doklam Plateau is very, very scary! Is there something that the Indians and the Chinese know about this track of desolate and frigid wilderness that we Bhutanese don’t?

I bring up this issue because it is time that the Bhutanese people understood the enormity of the situation facing us. Even the most remote possibility that Bhutan may be contemplating arriving at a settlement with China on the boundary dispute - particularly with respect to the possibility that Bhutan may be considering ceding the Doklam Plateau to China - drives India completely berserk! Seen from that context, it becomes clear why India did what they did during our last elections. India has shown that where this particular patch of land is concerned - they will go to any length: interfere brazenly by engineering the defeat of a political party that they see as being not sympathetic to their cause; perhaps even mount military action on Bhutan and Bhutanese territory - if it has to come to that - to protect their security interests.

Our two giant neighbors are unwilling to compromise - neither is willing to give an inch of ground and there are no signs of amicability or compromise in their stance towards the stalemate that persists. China is adamant that the Doklam Plateau belongs to them and has forcefully entrenched themselves in these areas for the past few decades. They have, even without so much as by your leave, already set up a series of road communications network within these disputed areas that connect the areas to Phari and from there on to all the way to Beijing. The truth is that whatever India or we say or do, there is no way we can dislodge them or their infrastructure from within these disputed areas. The seriousness of their occupation can be determined by taking a look at the areas on Google Earth. The disputed Doklam Plateau areas are encircled in red. You can see that the whole area is crisscrossed with a network of motor roads. Interestingly, the disputed areas of Jakarlung and Pasamlung are not indicated as disputed. On the other hand, the area on the North already ceded to China is still shown in red. May be somebody should write to Google to rectify the omission. 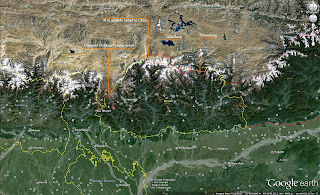 The Bhutanese - more precisely the Indian cartographers had included the areas of Doklam, Sinchulumpa, Dramana and Shakhatoe within the territorial boundaries of Bhutan. That is what the maps currently issued by Bhutan and India shows. But what needs to be seen is: is there a sound historical basis - as to why we can claim those areas as those belonging to Bhutan? Do we have stronger arguments than those put forward by China - in support of their claim that the areas belong to them?

Or, are our claims based on an imaginary line casually drawn across a paper map in the early 1900’s by some British colonizers - like those of the McMahon Lines - without actual verification on the ground?

Whatever the case may be, Bhutan needs to resolve the boundary issue with China without delay. Frankly speaking, neither the Doklam areas nor the Jakarlung areas or the Pasamlung areas are of any consequence to us. The reason is simple - these areas are practically uninhabitable and, unlike China and India, we do not have any strategic military considerations to worry about. For us we want peace and harmony on our borders - both to the South as well as to the North.

Both China and India understand that as far as we are concerned, we are agreeable and willing to whatever is suggested by either side. Bhutan simply does not have the bargaining power to impose our will - even our right to do so is in doubt.

But there is something that we certainly have to worry about - should this border dispute remain unresolved at the present level. There is a possibility that China may be tempted to revive their old territorial claims over what is currently Bhutanese territory. If that happens, then Bhutan stands to lose land as far as Kanglung to the East and Samdrup Jongkhar to the South. 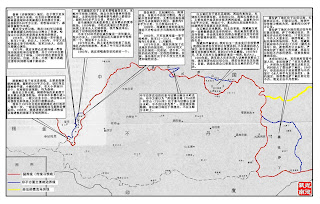 As can be seen, according to China, the red-line border is the outer boundary of Bhutan. According to this map, Bhutan's Eastern
boundary shrinks close to Kanglung. This boundary is shown as an extension of Arunachal which China claims belongs to them.

In conclusion, one of the readers here thinks that I am anti-India. I am not. In fact, I am totally pro-India. Since the time I remember, even as a kid, I have always seen India as a nation that supported Bhutan in every sphere of our lives. I remain ever grateful. As I told an Indian author (Mr. Nitya Jacob, author of Jalyatra, India’s Traditional Water Wisdom) who interviewed me few days back, as far as I am concerned, being anti-India is almost an act of treason. We have a saying - “One does not shit on the plate from which one eats”. I believe that being frank and truthful and pointing out each other’s mistakes could actually correct the flaws that have begun to creep in into our relationship. Every partnership goes through a phase of discord and misunderstanding. But the partnership between Bhutan and India is one that is long term - it has stood the test of time. Being totally landlocked and without any land or riverine access to any other country in the region, Bhutan understands that it would not be to her interest to jeopardize the excellent relations that exits between India and Bhutan. Therefore, India should have no fears on account of Bhutan reneging on her commitments to India and her security concerns. But certainly India should learn to treat us as equal partners - and not force the chicken to fly the coop. It is bad foreign policy.

I hope that my articles will help contribute to further strengthen Indo-Bhutan relations - based on mutual respect for each other and, even more importantly, grounded on truth and reality. I hope too that some Bhutanese now understand certain realities and will not be so quick to lay blame on people and causes - without having an iota of understanding of the real issues involved.