Well, it seems like it is finally happening! For the past many years I have gone hoarse making noise that the way to go is NOT TO build disastrous projects such as Punasangchu I & II, but to dam the Wangchu river in order that we can harness the excess water during monsoon which otherwise go to waste. It is shameful that a net exporter of electricity that we claim to be, have to import electricity from India during the winter months. 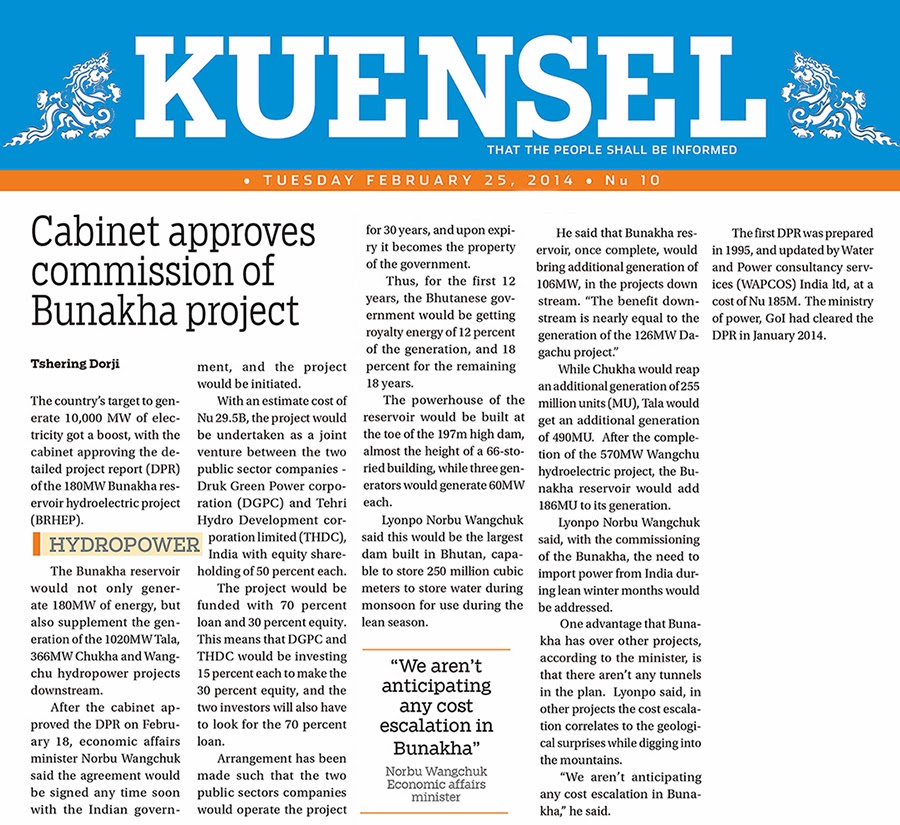 Power generation at Chukha and Tala drop drastically during the winter months - as a result of freezing of the glacial lakes that feed the Wangchu. As a result there is insufficient water to drive the massive turbines, resulting in poor generation. This means our earnings, (if there is any) suffer during the winter months, in addition to forcing us to import power from India.

The solution to this perennial problem should have been simple enough - dam the Wangchu river so that the excess water that go to waste during the monsoons can be harnessed - to augment the fall in water volume during winter months. This will not only solve the problem of falling revenue from these power projects, but it will prevent us from importing power from India.

Building a dam across the Wangchu river is so much cheaper than building a hydro-power plant. And, the construction is faster - therefore, the return on investment is quicker.

Therefore, the PDP government’s recent approval of the Bunakha project is a welcome move.

Unfortunately, my bubble burst when I realized that the reservoir construction is tied to the construction of yet another hydro-power project - the 570MW Wangchu Hydroelectric Project - at the current projected cost of Indian Rupees 29.5 billion. Add to this cost the customary and unfailing cost escalation of 400% - and the final figure will stand at close to Rs. 240.00 billion. I know that His Excellency Economics Minister Lyonpo Norbu Wangchuk said that there would be no cost escalations. At this point, the only thing I can say is that His Excellency is young enough that he will live to see what a poor soothsayer he made.

Will it not be more beneficial if we simply build the reservoir at about Rs. 5-6 billion, rather than go into another potential Punasangchu I disaster? Some one with some accounting basics should do some mathematics to find out which is more beneficial - return from the increased revenue from increased generation from Chukha and Tala during the winter months - as opposed to investment in a Rs. 240.00 billion Wangchu Hydroelectric Project that may see the light of day - some 20 years from now, if the dam does not sink, yet again.


I know, I know -- I am not entirely oblivious to the real truth that surround hydroelectric projects is Bhutan but I can't help it - I am a romantic at heart and lofty ideals and wishful thoughts are intrinsic to my nature :)-

Anyway, if this is a well-intended gift from India, it has to be the parting bonus from Ambassador V P Haran. Now lets see what the new Ambassador His Excellency Gautam H. Bambawale will bring - as his tofa to the Bhutanese people. Given his background, lets pray that his expertise will be another bonus for Bhutan.
6 comments:

On the morning of 22nd February, 2014, I was on my way to Paro Rinpung Dzong - but was undecided as to how to approach it - whether on foot over the Paro Ngami Zampa cantilever bridge or, by motor road running through the Paro Tshongdu. While I struggled with the indecision, I had parked my car by the roadside close to the Chortens at Ngami Zampa - to contemplate the merits and demerits of the two approaches to the Dzong. 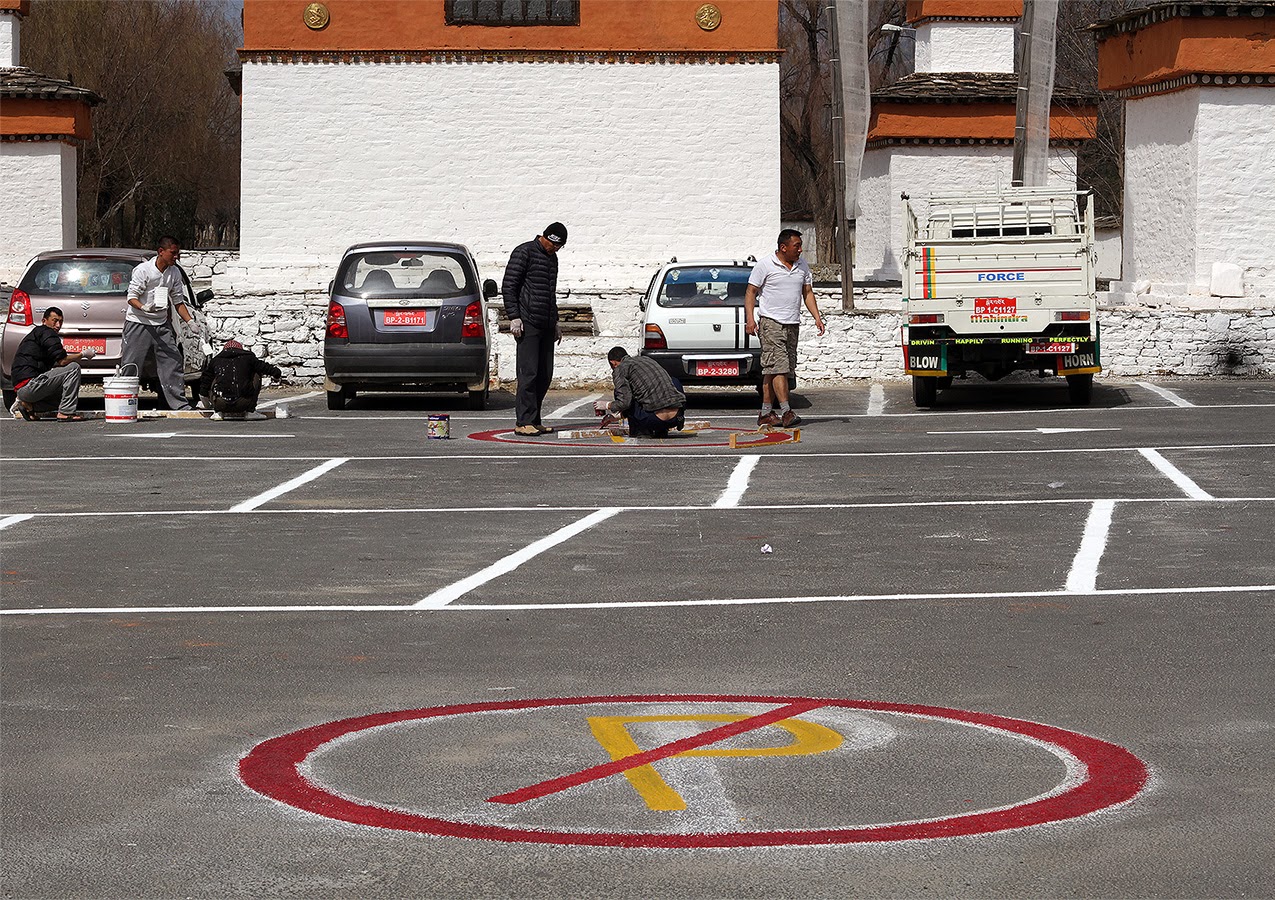 Then I saw him - the dreaded Police Namgay - the bane of most Bhutanese motorists. He was in civilian clothing, smeared in white paint and he had a surgical glove covering his palms.  He was hovering over a number of people engaged in painting white lines on the paved space that served as parking lot. Intrigued, I got out of my car and walked over to him and asked:

“Aaaaa …. I am trying to create an orderly parking space saa. In the absence of a properly defined parking space, it is madness at this spot. People park haphazardly and there is chaos every time. As in-charge of the traffic in these areas, maintaining order is a problem. Once in a while I have to pull up some drivers for poor road sense --- but in the absence of a well-defined parking spots, I believe that it is not fair to penalize people. So I am marking out the space for organized parking”.

“OK … but why is a Traffic Police Officer responsible for painting the white boxes?”

“Actually it is the responsibility of the Thromde … but they have this excuse that they do not have budget to do the job. I am so fed up that I decided to take on the job myself with help from some of my johnnies. Those guys doing the painting are traffic policemen. I got the Thromde to give us the white paint … and I encouraged some of my team of traffic policemen to put in the labor. We started the work last Saturday … but it rained in the night and washed away all the paintwork. So we are redoing it today. Once the markings are carried out, the parking will be lot more organized and as you can see, we can now fit in more than double the number of vehicles that would usually occupy the parking area. Once the parking lot is well defined, there is no excuse for anyone to be errant in the way they park their vehicles. If they do, I can kick their butts without feeling guilty about it”.

What a pleasure to come face-to-face with a rare Bhutanese who goes beyond the call of duty! Whenever one refers to Namgay, people have a tendency to say; “Aani Tengney Police Namgay ya?”

A few more Tengney like Police Namgay would certainly be welcome. I salute him for his service and initiative.
3 comments:

A Splendid Isolation: An Essay on Bhutan

I am very curious what the reaction to the book will be in Bhutan. Will Bhutanese readers understand the nuanced picture that I aimed for in this book? Will they be critical? I have no idea. What do you think?

Incidentally, here are the websites where Bhutanese can download the e-book. The first two will cost $2.99 per book. The Scribd site offers a PDF of the book for free -- and if you could post the Scribd link (and the others, if you like) on your well-read website, I would be very appreciative.

Anyway, I hope you are well. More soon…

I have read the essay and I loved it. I am amazed how an outsider who lived in Bhutan only few weeks can get to understand us and our confusions so accurately. I loved the title of the book too - "A Splendid Isolation": 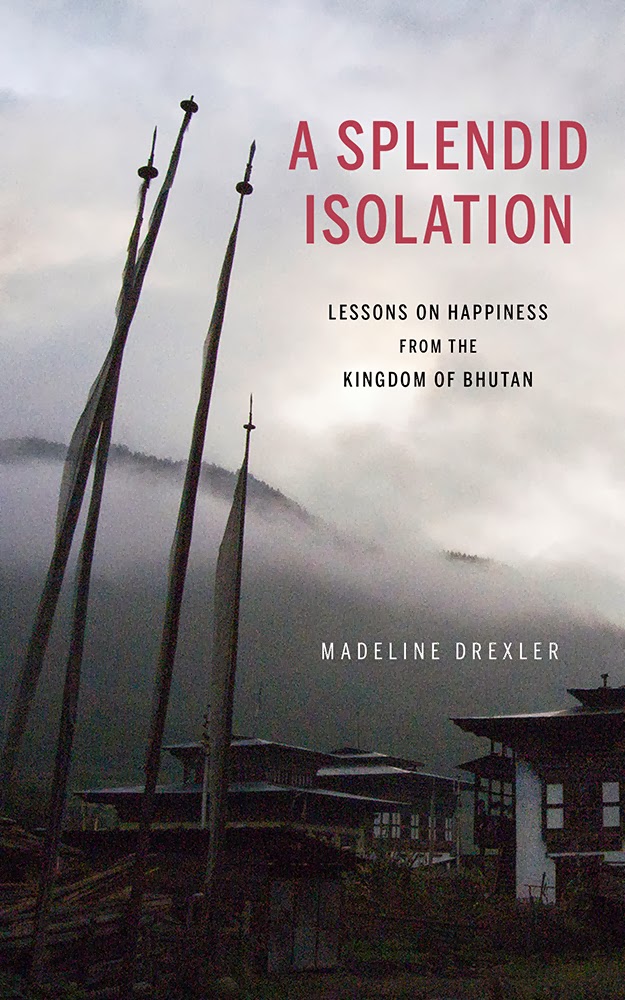 To tell you something about the author:

Madeline Drexler is an award-winning journalist, author and travel essayist. She is editor of Harvard Public Health magazine and a senior fellow at Brandeis University’s Schuster Institute for Investigative Journalism. Among her national honors: the 2012 Sigma Delta Chi Award for Public Service in Magazine Journalism; the 2012 Clarion Award for Feature Articles; and a 1996-1997 Knight Science Journalism Fellowship at MIT. Drexler’s articles have appeared in The New York Times, The Wall Street Journal, The Nation, The American Prospect, The New Republic, The Los Angeles Times, The Boston Globe, Nieman Reports, Good Housekeeping, and many other national publications. Her book Emerging Epidemics: The Menace of New Infections (Penguin, 2010), originally issued in 2003 as Secret Agents: The Menace of Emerging Infections, drew wide critical praise. Drexler began her career as a staff photographer for The Associated Press.

Madeline has allowed the Bhutanese readers to download the Scribd version and read for free.

Email ThisBlogThis!Share to TwitterShare to FacebookShare to Pinterest
Labels: GNH

Emerging Sophistication Of The Bhutan Palate

Did you know that there is a meat shop in Thimphu that sells canine meat? Order your supplies from the following meat shop located in Chang Bangdu area: 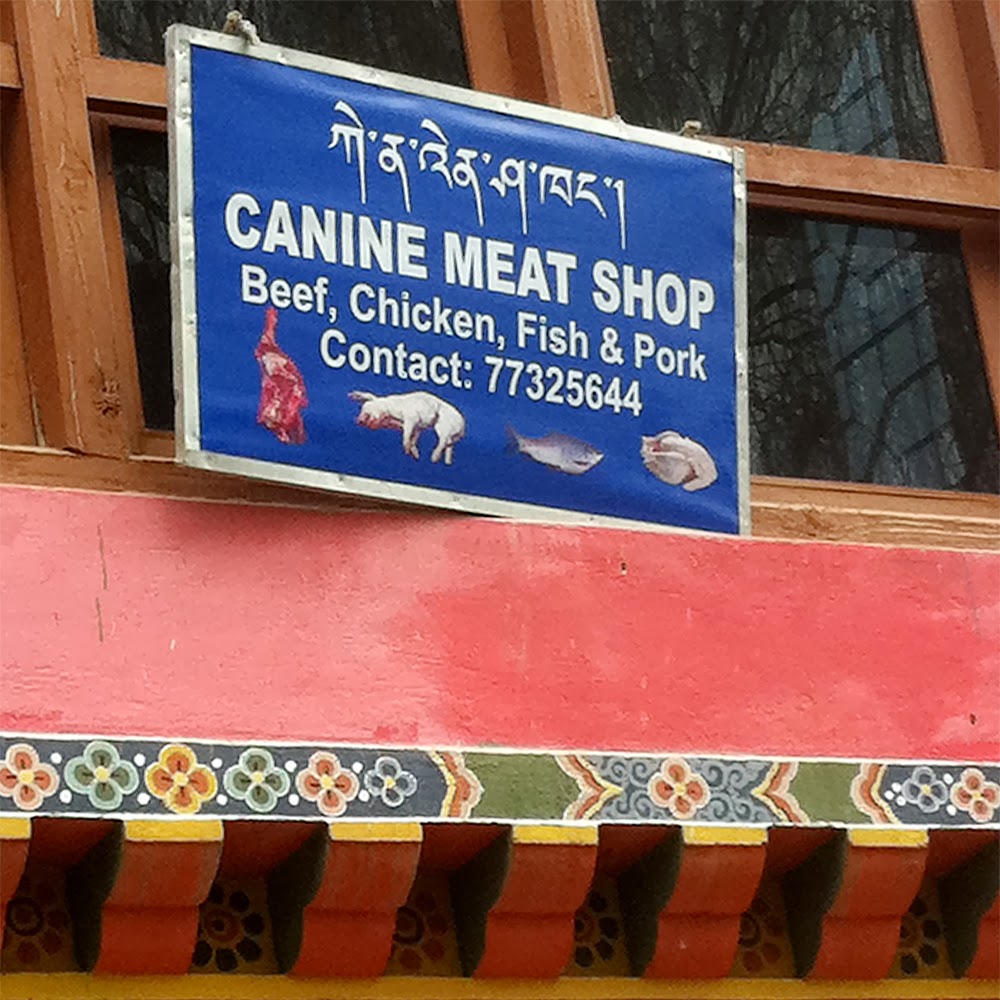 But please remember that canine meat does not necessarily mean that you are getting dog meat. Canine could also refer to all dog-like mammals such as wolves, coyotes, jackals etc. So please state your preference clearly: dog? coyote? jackal? wolves?
No comments:

Email ThisBlogThis!Share to TwitterShare to FacebookShare to Pinterest
Labels: Miscellaneous

The Rotary Club of Thimphu (District 3292) is calling for applications for Rotary Peace Fellowships from all eligible Bhutanese scholars and students. 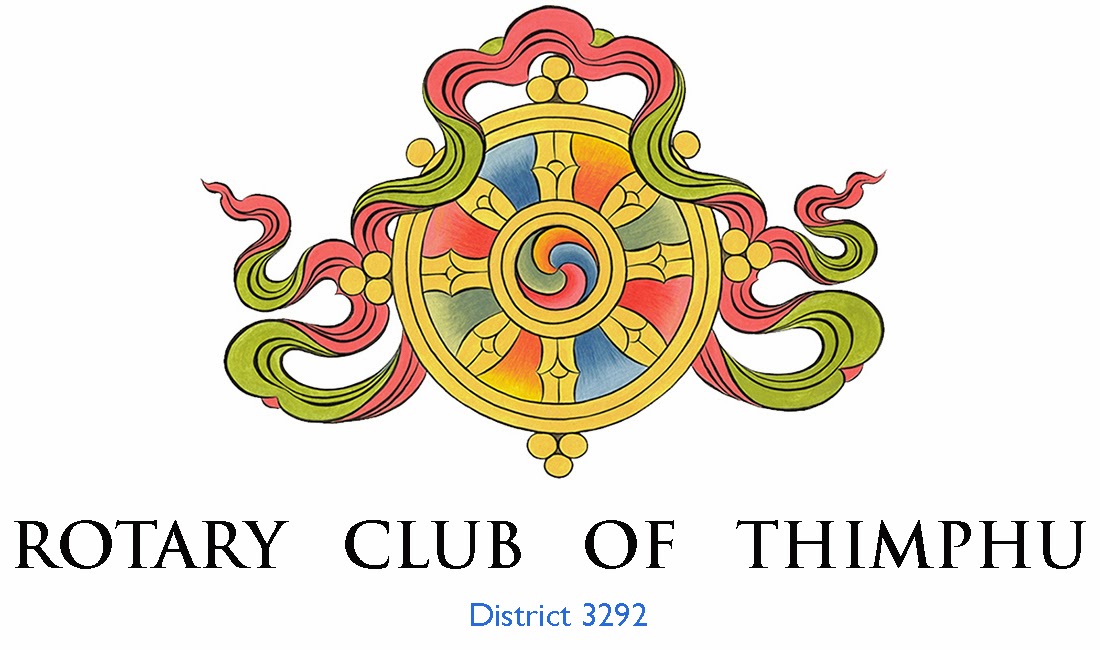 Additional details can be found at the Club’s FaceBook Page at:

www.facebook.com/RotaryBhutan
Rotary Peace Fellows study at one of the 6 Rotary Peace Centers around the world and can either earn a professional development certificate in peace and conflict resolution or a master’s degree in international relations, public administration, sustainable development, peace studies or a related field. These fellowships cover tuition and fees, room and board, round-trip transportation, and all internship/field study expenses.

To apply for a peace fellowship, please download the Application Form available at:

Please complete the applicant portion of the Form and submit it via email to the Rotary Club of Thimphu at:

All communications to the Rotary Club of Thimphu may be addressed to:

Other than one, there is no restrictions on who can apply - nor a limitation on the number of applications. The Rotary Club of Thimphu will be happy to receive and process all the applications it receives.

This is a community service of the Rotary Club of Thimphu and it is hoped that a large number of Bhutanese students and scholars will qualify for the scholarships.

Please rush the applications and BEST OF LUCK!

NOTE: Persons related to Club members are not eligible to apply for the scholarships.
11 comments:

Email ThisBlogThis!Share to TwitterShare to FacebookShare to Pinterest
Labels: Education

From what KUENSEL reported recently, it would appear that if the National Council were to have its way, we will finally see some much needed change in our electoral laws - particularly those that pertain to the experience required to be able to contest in the elections to the Upper as well as the Lower Houses of the Parliament. 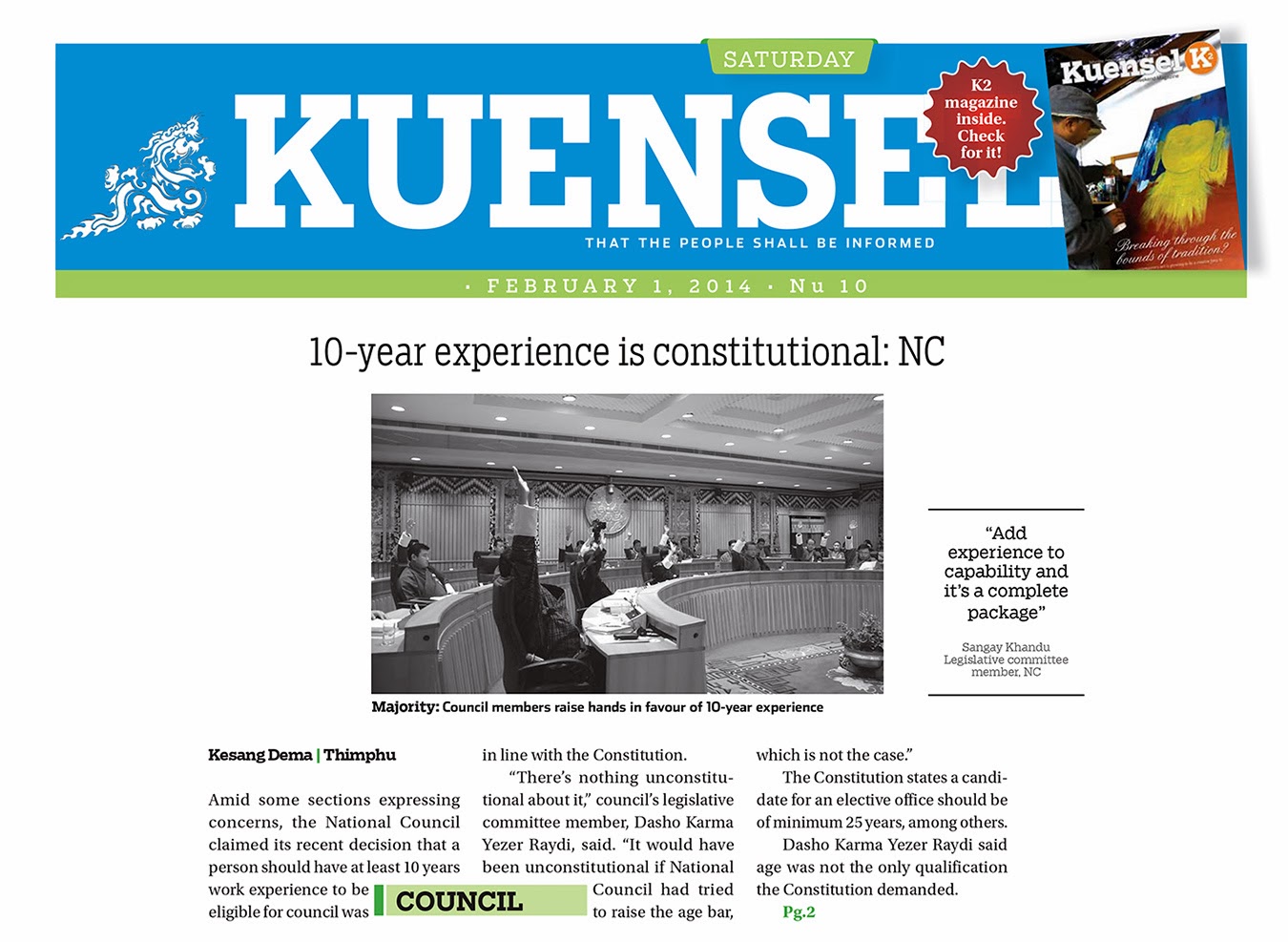 As of now, as per Article 23 of our Constitution, any person aged 25 and with a college degree can qualify to contest in the elections. There is no talk of a requirement of adequate experience. 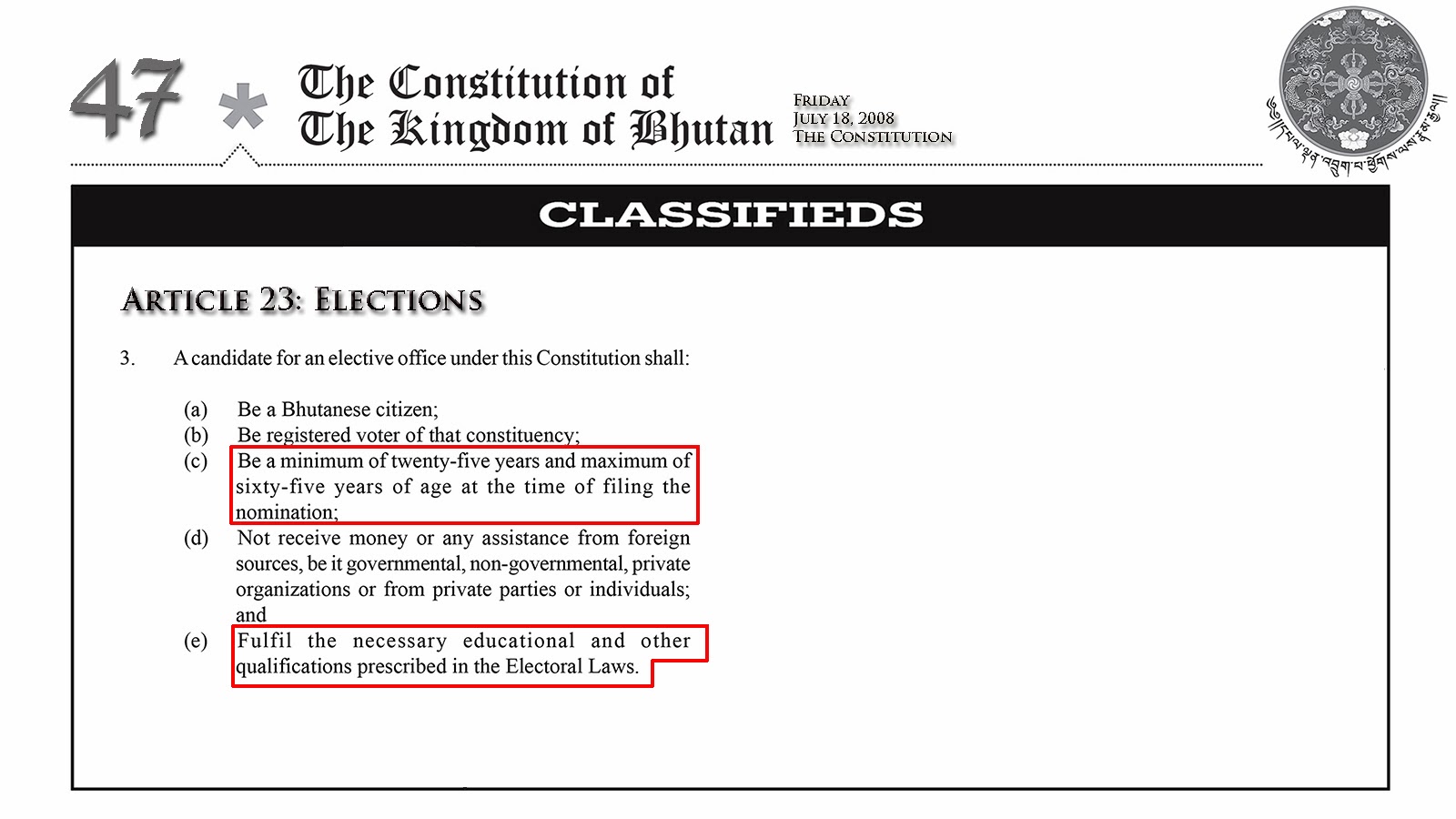 If the proposed amendment is approved by the NA, then we can be sure that our elected Members of the Parliament in future will be better experienced than those of the sweepers working at the Shearee Square Super Store or the Tractor drivers of M/s Kelwang Pvt. Ltd. I had discussed this matter in my earlier post dated May 8, 2013. 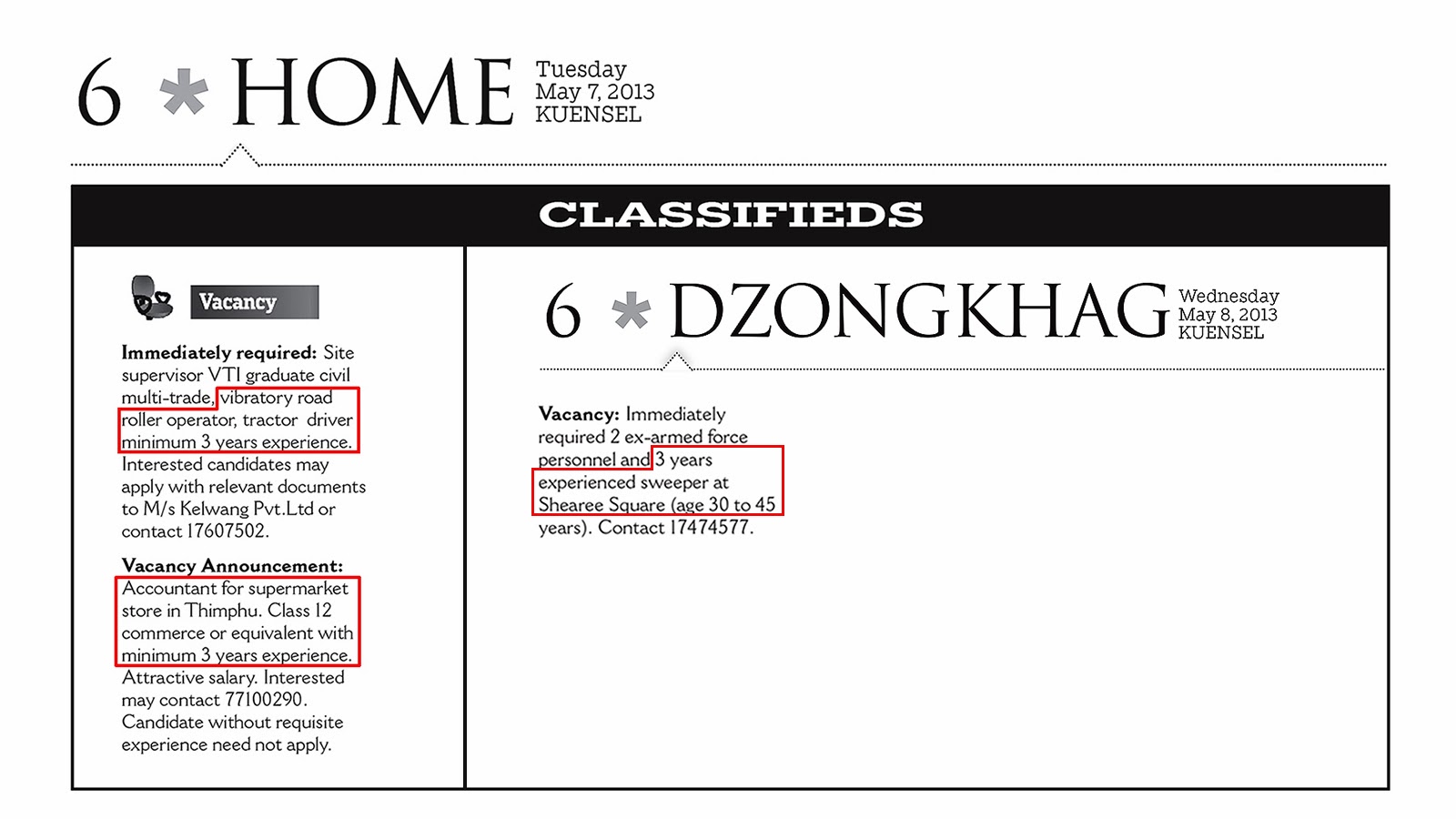 Here is a Thumps-Up to the Members of the National Council. 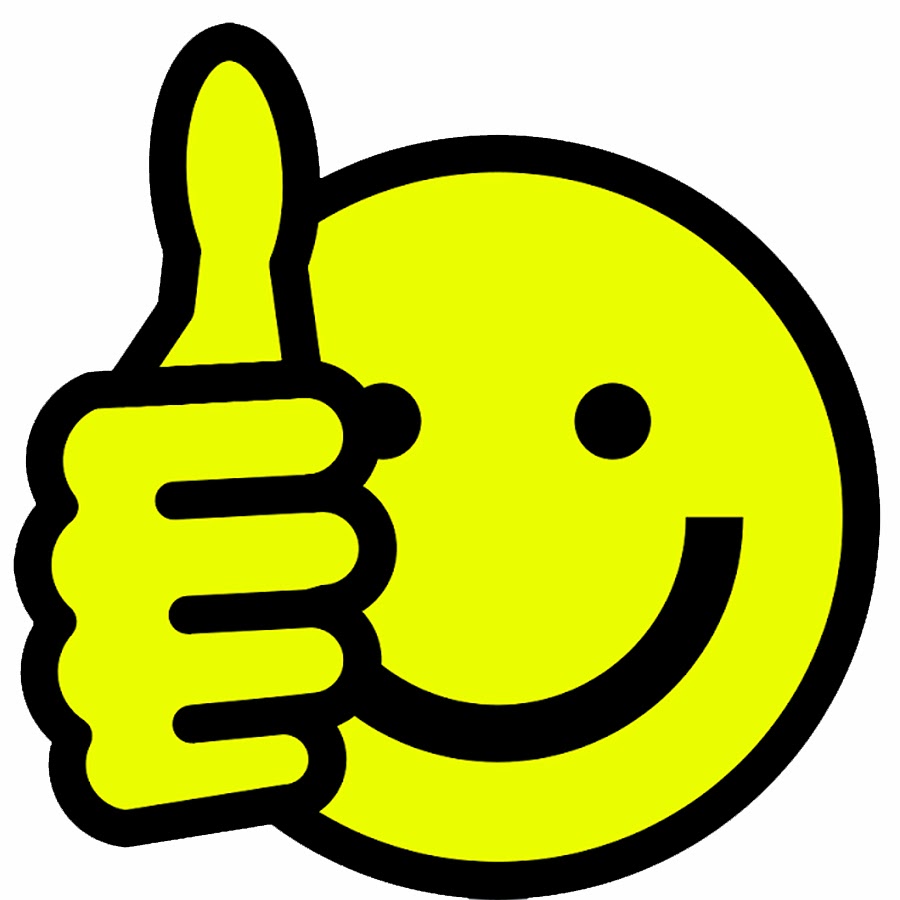