India recently inaugurated the start of work on their 508 KMs Mumbai-Ahmedabad Bullet Train project that is expected to be completed by 2023. The project was initially estimated at Rs. 63,000 Crores but it now stands at Rs.110,000 Crores (about US$17 billion). This is 8 times Bhutan’s GDP! But that is not the breaking news.

Even more interesting, the loan is repayable over 50 years – starting after 15 years as of 2017. That is very, very interesting – but not entirely earth shattering.

What is THE BREAKING NEWS is this: India is getting the loan from Japan at 0.10% p.a.!!! Yes, what you are seeing is correct – the interest rate is ZERO POINT ONE ZERO PERCENT!

Compare that to what Bhutan is paying to India for our doomed hydro-power projects:

This is one hundred times more than the rate India will pay Japan!!!

India is our closest friend and ally – through thick and thin, we have been with them ---- so naturally we are very happy that they got such a fantastic deal from Japan.

But what about us? India is an emerging economy with a GDP of US$2,400 billion. Our GDP is a minuscule US$2.4 billion – less than one thousandth of India’s.

How come a poor country like Bhutan is paying an interest rate that is hundred times more than what one of the world’s biggest economies is paying?

A Handful of Red Bhutanese Earth – After 52 Years

In a faraway land at the edge of the earth—a place called Sacramento, California, USA, 14 time zones away from Bhutan—a young starry-eyed novice amateur ham operator sat at his set, rotating the dial of his station. Suddenly, he chanced upon what is known in ham parlance as a “pile-up”. Incredulous and spellbound, he edged closer to make sure that he was hearing correctly what was being transmitted over the airwaves in single sideband, or SSB, mode.

There was no mistaking it! Even as he listened breathlessly, he realized that he was witness to an extremely rare ham radio event. A dream opportunity was being orchestrated right in front of his eyes—or ears. And yet, he could not participate, hampered as he was by his older, simpler continuous wave, or CW-only, radio set.

All of a sudden, through the deafening cacophony of a million SSB calls, he heard an unmistakable South Carolina drawl:

His hand trembling with excitement, the novice grabbed his telegraph key and, in a series of dits and dahs, sent out his then CallSign, WA6SVY, in CW mode: Morse Code.  The center of the universe on the receiving end acknowledged his call thus:

It was 29th April, 1965, 8.19 AM in Sacramento; 9.19 PM in Thimphu. The young operator was the 17-year-old novice ham, Stephen Frederick Jones. The operator on the other side of the globe was none other than the legendary American Ham radio D’Xpeditioner, Gus Browning. Gus, as he was known in the ham world, was operating from a land that fewer than 0.50% of Americans had heard of—a place called Bhutan, then considered the rarest of rare ham radio countries.

In the annals of ham radio history, it was a signal event, literally and figuratively. For the young Steve Jones, it was a windfall few amateurs around the world dare dream of: getting a QSO, or conversational contact, from the fabled Gus. Even more astonishing, Gus was operating from a ham radio Shangri-La, a mythical Himalayan Kingdom that to this day eludes most people’s geographic familiarity.

Ham Radio CallSign of Stephen Frederick Jones, as he was known as a novice operator. 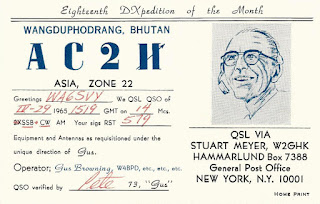 QSL Card of Gus issued to Steve Jones for his contact in 1965
More than half a century of pinning to operate ham radio from Bhutan, the young novice – now a greying 69 years old First Class ham radio operator – Stephen Frederick Jones - has finally made it to Bhutan. He arrived Paro this morning - 12th October, 2017 and right away went about trying to string up his 160M wire antennae. But before he proceeded with the set up, he stooped to the ground and gathered up a handful of red Bhutanese earth and uttered; “I am finally here”. 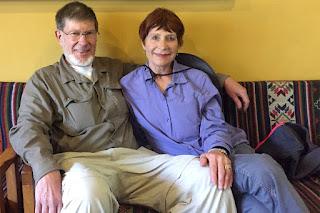 Mr. Stephen Frederick Jones started to send out his radio signals to the world hams – beginning this evening. He will operate until the night of 18th October. To honor the legendary Gus, Steve has named his DXpedition “Gus Browning Memorial DXpedition” (http://www.arrl.org/news/gus-browning-memorial-dxpedition-offers-opportunity-to-work-bhutan-on-top-band).
1 comment: