The Shingkhar-Gorgan Road - Yet Again!

Our Prime Minister Tshering Tobgay was the first speaker of the Session 12 on the concluding day of the TED Conference in Vancouver, Canada (15th - 19th February, 2016).

Within hours of his riveting talk at the conference, a friend sent me a link to the TED website where his talk was featured on the front page. It was heartwarming to see our Prime Minister speak with such skillful eloquence - nary a hint of hesitation nor of faltering - notwithstanding the presence of the assembly of people who, in his words:

“….. some of you here are worth more individually than the entire economy of my country”.

He spoke of our Gho and Kira, of our flourishing culture and of GNH, and free education system and the smallness of our population and economy - all of them with the deftness of an accomplished orator.

Amid laughter and applause, 7 minutes and 14 seconds into the talk, he declared:

Then, 12 minutes and 55 seconds into his total 18 minutes and 47 seconds speech, the Prime Minister proclaimed:

“But it is our protected areas that are at the core of our carbon neutral strategy. Our protected areas are our carbon sink. They are our lungs. Today, more than half our country is protected, as national parks, nature reserves and wildlife sanctuaries. But the beauty is that we've connected them all with one another through a network of biological corridors. Now, what this means is that our animals are free to roam throughout our country. Take this tiger, for example. It was spotted at 250 meters above sea level in the hot, subtropical jungles. Two years later, that same tiger was spotted near 4,000 meters in our cold alpine mountains. Isn't that awesome?

We must keep it that way. We must keep our parks awesome. So every year, we set aside resources to prevent poaching, hunting, mining and pollution in our parks, and resources to help communities who live in those parks manage their forests, adapt to climate change, and lead better lives while continuing to live in harmony with Mother Nature”.

The Prime Minister then went on to talk about another of Bhutan’s conceptual ideas - Bhutan for Life - an environmental conservation effort intended to improve our environment even better than it already is - for the benefit of the earth that is growing sicker by the year.

“We will look into the reasons why the clearance was delayed and if the road is not illegal, work should start this year”.

His Excellency the Prime Minister was clear on this day that the construction work on the Shingkhar-Gorgan road will start this year - “if the road is not illegal”.

A great relief to those of us who know that the construction of this road is not only very, very illegal but also environmentally disastrous!

Dantak to construct the Shingkhar-Gorgan highway
The construction of the 56-km Shingkar-Gorgan highway has been awarded to Dantak, according to the Prime Minister in the mid-term review held in Lhuntse yesterday.

For the construction of the Shingkhar-Gorgan highway, the government has allocated a budget of Nu 779mn and the project was awarded to Dantak because they have more machineries. The authorities are waiting for an environment clearance from the National Environment Commission (NEC) to proceed with works.

A rather disconcerting report - that the construction of the road has been awarded to the DANTAK. It is also confusing that “The authorities are waiting for an environment clearance from the National Environment Commission (NEC) to proceed with works”. The procedure is that they must first obtain clearance from the Department of Forestry and Park Services, which I know have been denied them, time and again, based on the rules that are in place.

I was crestfallen by this announcement but after a fretful sleep, I woke up to realize that the transfer is not so bad after all. As the Secretary of the NEC, he has even more teeth - to ensure the protection of our nature and our environment.

Forestry Director General Chencho Norbu has been admirably unshakable and steadfast in his opposition to the construction of the illegal Shingkhar-Gorgan Road.

Bhutan’s promise and declaration at the COP 21 and that of our Prime Minister at the TED Talks in Vancouver are based on the premise that they are good for humanity. It is now time to transcend the spoken words and demonstrate to the world community that those promises and declarations were made in complete sincerity and with the intention to translate them into action on the ground.

Our conservation and environmental protection laws that are in place explicitly do not permit the construction of the Shingkhar-Gorgan road, not through the areas it is proposed. Thirty six Kms. of the total 56 Kms. of this road goes through complete wilderness. Even worst, the road has to pass through Singmala Pass that is at an elevation of over 4,000 Mtrs. - which is even higher than Thrumshing-La which is at 3,780 Mtrs. In fact, if this road is done, it will be the highest elevation road in Bhutan - even higher than the current highest point - Chele-La Pass at 3,988 Mtrs.

If the government has 779 million ngulturms to spare on a road that is illegal as well as useless for anybody, I would like to suggest that they spend it on building a bridge over the Mangdechhu in Rindibi, Zhemgang - where nine men died during May of 2014, trying to cross the river on a poorly equipped and unauthorized ferry service.

Since 2011, I have been opposing this road - on the grounds that it is not beneficial, illegal, and environmentally disastrous. The Agriculture Minister of the erstwhile DPT government, Dr. Pema Gyamtsho, offered to resign from the Cabinet, should this road happen. The DPT government finally abandoned the foolhardy idea in 2013, realizing that they were acting against the law. And yet, this road keeps popping up, time and again.

Is there something that the Bhutanese people do not understand about the need for this road? Why is there such pigheadedness about this road, in spite of being fully aware that its construction is illegal, it passes through geographical conditions and landscapes that are perilous, and will not contribute to the economic or social betterment of the people in the area?

What exactly is the matter?
12 comments:

Strange Problems Of Our Hydropower Projects

Indian newspapers report that in the past two years, Jaypee Group has been selling off their assets - cement factories and power plants - in a bid to bring down their Rs.75,000 crore (US$11.00 billion) debt to lenders. Most recently, they sold one of their cement units that would help them shrink their debt by Rs.16,500 crore. But that is not enough - not by a long shot. Lenders to the group are jumpy and want more done. They want to see some more assets sold. Considering that almost two-thirds of the group’s debts are in default, the bankers have called the situation “grim”. 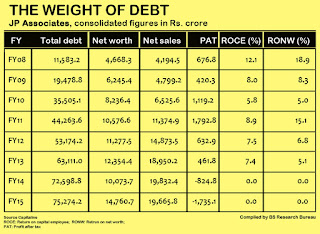 The "grim" picture of one of our biggest hydropower contractors.

Strangely, while the Indian media and the judiciary are on a blitzkrieg hounding away at poor Vijay Mallya the liquor baron for his bad debt amounting to Rs.9,000 crore, there is an eerie hush on the hefty borrowings amounting to Rs.75,000 crore by the Jaypee Group - two-thirds of which are said to be in default!

So what does this mean for Bhutan? In case you did not know, Jaypee Associates - part of the Jaypee Group for whom no dream is too big - is among the biggest Indian contractors hired to build many of our troubled hydropower projects. They have contracts that run into thousands of millions, awarded to them by many of our ongoing hydropower projects.

In addition to the fact that our self-liquidating hydropower projects have been contracted out to contractors whose financial standing is now proven to be in serious doubt, if not downright dangerous, we have recently been informed of some seriously inexcusable disasters in the hydropower sector.

It was reported that the Dagachhu Hydropower Project - barely a year old - had to be shut down for two months!! The why for is not important - what is appalling is that a brand new plant is required to be shutdown - as a result of design/construction flaw.

There was a major mudslide at the Mangdechhu Hydropower Project site - causing loss of life to some workers.

A cave-in occurred at the surge chamber of Punatsangchhu-II’s powerhouse - killing six people. How does such a thing happen? How can any one - sane or insane - explain away such a terrible occurrence?

What is the probability that, in future, entire roof of the powerhouse of one of our many projects will not cave in, for whatever reason? Imagine the consequences of a whole mountain coming crashing down on top of a power plant!

He recently said, “After commissioning of the Kurichhu Hydro Project (60 MW) in 2004, people of Lower Assam are the worst victim every year. Just imagine the disaster that will come upon us, if all the dams (over 80 planned) are commissioned at some point in time,” said Ajad Ali.

This is a clear indication that Assam views our hydropower dreams as a threat to the Assamese people downstream.
No comments:

On this International Day of Women, Give Bhutanese Women Equality

On this International Women’s Day I would like to offer Greetings to all the Women of Bhutan, and to those all around the world.

There are huge moral and social issues that challenge women around the world. In Bhutan, the issues are not as varied or as condemnatory. In fact our social and religious beliefs make no distinction between a Woman and a man.

But one of our laws do - it vilifies our Women! This law is an insult to our Women - it degrades them to someone lesser than a man. Our primeval law that disallows citizenship to children born to Women who cannot name the father of the child, or fathered by none-Bhutanese, is an affront to Women of Bhutan.

It is a law that has forced many Women in Bhutan to resort to unlawful acts of deception. This law has forced hundreds, if not thousands of Women around the country to name their fathers (grandfather of the children) as the father of their fatherless children, so that they may qualify as a Bhutanese and be entered into the national census records. At one level this could be branded as incest and, at another, it forces a citizen to commit an act of willful crime. Thousands of children born to legitimate Bhutanese mothers are denied their birth right to citizenship and education, because their mothers are unable to name their fathers or that they have been fathered by a none-Bhutanese.

There is nothing dignified or honorable about this law. Every lawmaker - men or Women - should hang their heads in shame that such a disgraceful law should be allowed to continue to humiliate our Women.

Therefore on this International Day of Women, let us make a promise to make the abolishment of this law our defining issue for this decade.
No comments:

Email ThisBlogThis!Share to TwitterShare to FacebookShare to Pinterest
Labels: Legislation

Here is something that should bother every Bhutanese with a conscience:

This is an issue I have been bringing up once in a while. One of my 8 Lunar New Year Wishes this year concerns this issue. No self respecting society should allow such gender inequality - not particularly in a country that prides itself as a GNH country.
No comments: