As informed in my yesterday’s mail, contrary to what Mr. N Rhodes wrote, Bhutan did use Cowrie or seashells or Karshapani - as it is known in the local language – as money. There is written proof of it in an ancient ritual prayer book called “NAMSAY YANGKHUG”. It is a book dating back to the time of Buddha – it praises NAMSAY the God of Wealth and in it the people entreat him for a hundred thousand Karshapani on a daily basis. You would know the God by its Hindi name – Kuber or Kubera.

Obviously this book proves that the Cowrie pre-dates the use of salt as currency. Bhutan also used salt as currency – as did few other countries around the world such as – the UK.

My book will carry two articles that describe the use of Salt and Karshapani as monies. For now as desired by you, I reproduce below a small portion of page 423 of the book where the narration: “Please gift us, on a daily basis, a hundred thousand Karshapani” appears.

The text on page 423 zoomed in

Translated into English
No comments:

One For The Hilltop

The Rotary Club of Thimphu continues to deliver humanitarian service – unabated. The latest in the series of projects we implemented was the delivery and installation of a 12,000 liters capacity, gravity activated, patented, SkyHydrant water filter at the Tango Center for Buddhist Studies. The filter is large enough to cater to the needs of both the Tango Dzong as well as the institute. 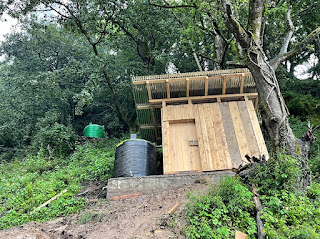 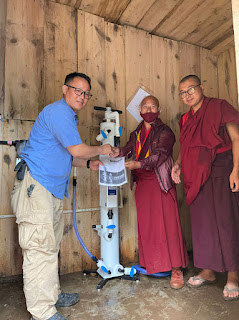 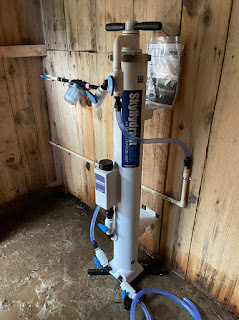 This 3-years, one million Australian Dollars project is a collaborative effort between the Ministry of Education and the Rotary Club of Thimphu. The funding is provided by Disaster Aid Australia – a Rotary created NGO based in Melbourne.

Relations between Bhutan and the Koch Kingdom (modern day Cooch Behar within the state of West Bengal) go back centuries. In fact written records now confirm that Bhutan’s earliest silver Maartums were hammered in Cooch Behar – not in Bhutan. Those coins were most often referred to as Deb Rupee – Rupee of the Deb – or Druk Desi’s coins. The metal used was silver.

Bhutan was flush with foreign coins – I believe that of the coins of eight foreign countries that found their way into Bhutan, the most numerous were the Narayani of Koch Kingdom, Baltum from Nepal, Boetum from Tibet and Rupee of East India Company/British India Government. The earliest of these coins were all in silver.

Amazingly, some of those coins still survive in Bhutan. Recently I acquired the following Koch Kingdom’s earliest known silver coin – called the "Narayani" - symbolically from a remote village in Chhukha, close to the State of West Bengal: 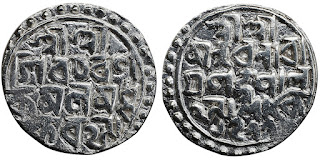 10.00 gms; 24.02 mm
Silver Narayani of Maharaja Naranarayan - issued during his coronation in 1555. Supposedly this is the first ever coin issued by the Koch Kingdom.

Koch Kingdom’s most powerful king - Maharaja Naranarayan, son of Maharaja Biswa Singh of Cooch Dynasty, issued the above coin. It was issued to commemorate his coronation that took place in 1555. Thus this coin is close to four and a half centuries old.

During late 1780's, the British government shut down the Cooch Behar mints - resulting in stoppage of supply of coins to Bhutan. This is when Bhutan was forced to start to hammer our own coins. Some say hammering coins in Bhutan began in 1790.

In 1866, the British India government stopped the circulation of the Narayani coins altogether. Thereafter no Narayanis were issued, although the ruling Maharajas of Cooch Behar did issue commemorative coins on the first day of their accession to the throne.

UPDATE FROM AN EXPERT: 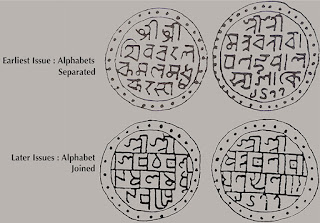 Realizing my dream project – a coffee table book on Bhutan’s coining journey – has taken more time than it should. There are a couple of reasons for it – firstly I have to put in many grueling hours every day for Rotary work, leaving me with little time for the project. Secondly, I find that much of the recorded history turns out to be faulty. Thirdly, getting to photograph the coins in the right way has been an exercise in futility. But after trying for over a year, I believe that I have finally nailed it. The following images should tell you that it cannot get any better.

As a rule, collectors do not clean old coins. But a soiled coin makes for poor detail – thus my book will feature coins that have been cleaned – for clarity of details. Centuries of handling by thousands of people result in the deposit of layers upon layer of grime on the coin’s surface. A coin caked with grime may look ancient and collectible – but much of the coins details remain concealed. The only way to bring out the details of the coin is to give it a cleaning treatment.

Tibet is perhaps the first country with whom Bhutanese interacted, including Nepal with whom we were in touch – as far back as early 1600’s. We even had a postal service running between Kathmandu and Punakha. Thus in addition to Boetum (coin of Tibet), we also had Baltum (coin of Nepal) entering our country. In total coins of eight foreign countries were available in Bhutan:

The following are some of the coins hammered by Bhutan – supposedly beginning 1790 - 1910. After 1910 when Gongsa Ugyen Wangchuck ruled as King, new breed of coins began to emerge. They were produced from machine cut dies. As of 1928, machine milled coins came into being - during the time of the second King, His Majesty Jigme Wangchuck. 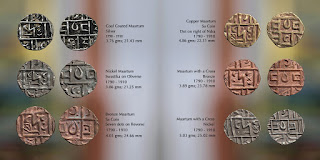 The following are some of the coins of Tibet. Tibetan coins were the most numerous. Thus my book will feature 9 coins of Tibet while only 3 each of other foreign country’s coins will appear in the book. 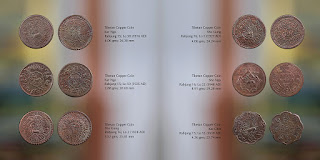 By the way, the colored background on which the coins sit is actually a row of colored prayer flags that flutter on the hillock where the Dechenphodrang Lhakhang stands - I wanted just their colors, which I achieved by throwing off the details of the prayer flags – through the selection of very low aperture on the camera’s lens.