If being locked down were not enough, my life suddenly got complicated by my pursuit of history – this time about the history of our postage stamps. By necessity, the history of coinage was expected to be blurry, hazy and supremely challenging – given that facts and myths need to be gleaned and weighed and analyzed from events and occurrences spanning few centuries of our tumultuous past. But the history of Bhutan’s postal service is less than seven decades old – thus it shouldn’t have to be this complicated. But I find that it is.

A Washington-based reader of my blog who sent me a handful of images of our Gold Coin Stamps from the 1960’s put me on the road to postal history – I had made a mention of him in my last blog. Since then I have done nothing but look at our old postage stamps and re-examine their history. Quite incredibly, I discovered that the history of our postage stamps is even more intriguing and fraught with mysteries and improbabilities that have my tongue hanging out a mile long.

Let us begin at the beginning – 1954 when, for the first time, Bhutan issued stamps. They were a set of four stamps in four different colors. Actually they were not postage stamps – but what we call "Revenue Stamps".

Bhutan's first stamps - Revenue Stamps as they are still called

The confusions with these stamps are primarily three:

– identification marks or face value of the stamps? If they were face values, they do not say
whether Ngultrums or Chettrums.

2. They were called Revenue Stamps – I do not know why. They should have been called

3. Curiously, in early 1955, these fiscal stamps were assigned to be used as postage stamps,

under the authority of the IIIrd   King – as conveyed in writing by the Zimpoen, on

17th September, 1955.What is funny is that there was no postal service then –

Bhutan’s postal service was established on 10th October, 1962 – in Phuentsholing. 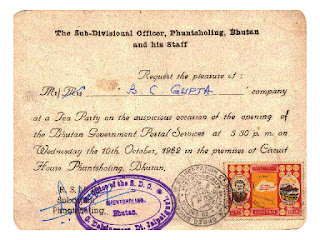 Launch of Bhutan's postal service on 10th October, 1962, in Phuentsholing

Between 1966 - 1996, some more of these fiscal stamps were issued – including a number of, what we chose to call – “Legal Stamps”. But unlike in the past, this time all of them had a face value, and they were designated in Nu./Ch.

Revenue and Legal stamps with face value denominated in Nu./Ch.

Now I find it funny that the stamps were called “Legal Stamps” – we still do. Did we have illegal stamps? A more appropriate nomenclature would have been “Judicial Stamps” - as the Bhutanese call them "Genja Ticket".

Email ThisBlogThis!Share to TwitterShare to FacebookShare to Pinterest
Labels: History of Postage Stamps