The photo below is of the dam site area of the country's biggest hydro power project - the 1,200MW Punatsangchhu Hydro Power Project-I. The sign board depicted sits bang on top of the area where the project's dam has been under construction for the past close to a decade.

No words can better describe the pathetic story that is the PHPA-I. The picture tells the story. It was taken on 16th February, 2018. The project authorities are admitting that the area is SINKING. 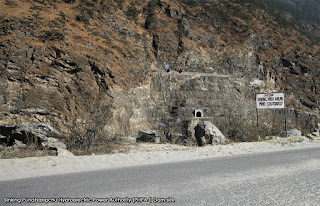 It is my understanding that the project may never see the light of day. The project's coffer dam has seen flooding for two successive years. If the project authorities failed to do a better job of designing a simple coffer dam, God only knows how many other design flaws are going to surprise us in the coming years.

Take for instance the matter concerning the de-silting of the dam. How well have they planned/designed it? How effectively are they going to be able to de-silt the mammoth dam of the few trillion tons of silt and muck that will be deposited annually into the belly of the dam, by the flooding Punatsangchhu? Even if they have a good design, where and how are they going to dump the muck?

If the dam ever gets built, what kind of water body is the 130 Mtrs. high dam going to create? How far will the back flow be? Will the water mass trigger earth quakes? Will it alter weather patterns?

So many questions remain unanswered. And, if that were not enough, we are told that the roof of the underground power house of PHPA-II caved in - burying unspecified number of workers.

In the meantime, solar energy is all set to take over from hydro - as the cleanest and cheapest energy source, in the next 4-5 years. And India is leading the way in the global push for harnessing the power of the sun. Hydro energy will be old hat .... and we will be left gaping at idle turbines worth few hundred billion Ngultrums in loans at 10% interest rate.

I want to know who will cry for us then?
4 comments:

One more – from among a slew of Humanitarian Projects by the Rotary Club of Thimphu.

Ms. Kezang Wangmo, a 26 years old Bhutanese young lady has a eye-related problem that is a mouthful to pronounce. The ailment is called – Keratoconus. Try and pronounce that! 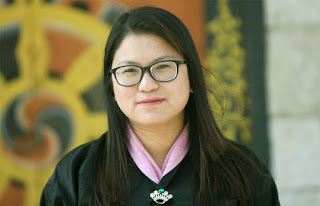 Wikepedia describes Keratoconus thus:
Keratoconus (KC) is a disorder of the eye which results in progressive thinning of the cornea. This may result in blurry vision, double vision, nearsightedness, astigmatism and light sensitivity. Usually both eyes are affected. In more severe cases a scarring or a circle may be seen within the cornea. While it occurs in all populations, it may be more frequent in certain ethnic groups such as those of Asian descent. 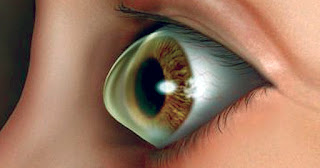 The girl approached the Rotary Club of Thimphu to help her correct the problem. However, the Club’s long established policy is that we do not take on individual cases. Regardless I happen to have a good friend in Dhaka, Bangladesh who is the Managing Director of one of the region’s best eye hospitals called Bangladesh Eye Hospital.

I contacted the good doctor for help, and he promptly agreed to perform the procedure needed - called CXL - absolutely free of cost. Not only that, he also agreed that his hospital would provide a guest room at a concessional daily charge of only Nu.1,000.00 per night. Over and above that, he would send someone over to pick up the girl and her husband from the airport. This is Rotary spirit at its highest - Dr. Niaz Abdur Rahman, Consultant Vitreo-Retina Surgeon & Managing Director of Bangladesh Eye Hospital, Dhaka is a Rotarian.

So, the cost of the procedure has been duly taken care of. Next hurdle was the cost of air ticket to travel to Dhaka and back. The girl and her husband are not financially capable for the reason for which she contacted us for help. So we then wrote to the national flag carrier - Druk Air for help. They readily agreed to issue two complementary round trip air tickets to the girl and her husband - in partial fulfillment of their CSR. In that respect, Druk Air has always been forth coming - we congratulate them for their sense of social responsibility, as the country's national flag carrier.

Now  it is all systems go - every thing is in place and the girl will soon be traveling to Dhaka to save her eye sights. She has problem in both her eyes.

Deliverance from darkness is what I call this. A worthy humanitarian Rotary project.
2 comments:

Yet Another Humanitarian Service Project by the Rotary Club of Thimphu

On Sunday the 28th January, 2018, the Rotary Club of Thimphu officially handed over 36 Pour-Flush Type toilets in the impoverished community of Bongo village, under Chhukha Dzongkhag. 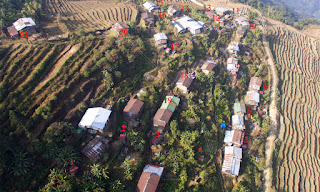 It is a mystery why Bongops are so poor that they cannot build toilets for themselves. This village sits bang in the middle of Bhutan’s earliest hydro power projects - Tala and Chhukha Hydro Power Projects. From all accounts hydro power projects are supposed to bring riches to the community where they are located. The reality is that even the access road to Bongo village is unpaved and barely usable. 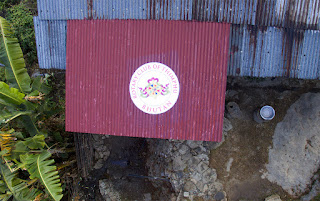 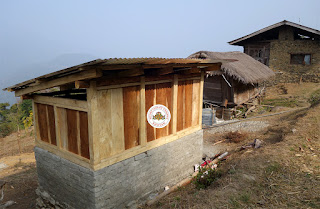 The Bongo toilet project is Rotary Club of Thimphu’s signature project. The level of community ownership and spirit of collaboration was such that the construction of entire 36 toilets were completed in 35 days – which is to say that one toilet took less than a day to construct. Around the world, the Rotary Club of Thimphu is credited with speedy and timely implementation of projects – but nothing comes even close to what we achieved in Bongo. The credit ofcourse goes entirely to one of the Bongo Tshogpa Members – Mr. Sangay Thinley. He tirelessly worked to ensure that the project was on schedule and that there was no cost overruns. Even better, what he and his team produced at the end of the project period is something that we can all be proud of. 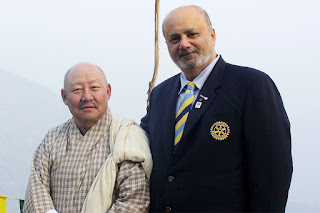 Shinier they come, better they get! Club President Tsewang Rinzing with Rtn. Bharatbhushan Jayantilal of Rotary Club of Metro Kuala Lumpur who represented the Malaysian Clubs during the handing-over ceremony of the toilets

But it appears that we cannot rest on our laurels – not just as yet. The village next to Bongo called Ketokha is on to the act – they too want toilets. And they want 59 of them! And why not? Who are we to deny them their toilets? Happily, we are already working on the project – cash for 4 toilets is already firmly in the pocket – 55 more to go down. And, we will get there – with help from some 3 million bountiful Rotarians spread over 220 countries around world.

After all, I have to be kept honest too -  I cannot be allowed to forget that I was, after all, born on the World Toilet Day – 19th November! 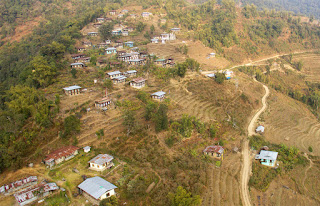 The names of the donors to the Bongo Project is listed below. As you can see, it has mostly been the Malaysians’ show:

One person's name does not appear on the above list - that of Rtn. K K Looi. He deserves special mention for his role in raising the money that made it possible for R C Thimphu to implement the project. He put together the donors who contributed money. 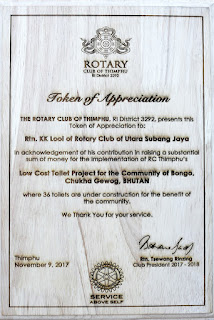 Token of Appreciation Plaque issued to Rtn. K K Looi, for his contribution, by the Rotary Club of Thimphu
No comments: