Something fishy has to be going on about this illegal Shingkhar-Gorgan road. I thought that we had buried the issue - but it has reared its ugly head once again. The Kuensel has reported on it yet again, in their 13th April issue. The story filed by reporter Tempa Wangdi makes it clear beyond any doubt that there is more to the construction of the Shingkhar-Gorgan road, than meets the eye.

Is it possible that the road is being pursued – not for the economic betterment of the people of Lhuentse as is claimed, but because of some private interest? Is some private interest behind this relentless push to do the road, even while being fully aware that it is illegal, meaningless and environmentally destructive?

The Kuensel has been candid in reporting the views of the National Environment Commission (NEC) on this issue:

1.  That the NEC will not consider environmental clearance for the road’s construction - until the
government first sorts out the legality of the road. This means that the construction of the
Shingkhar-Gorgan road is illegal.

3.  The NEC also pointed out: “In the EIA report, most of the baseline information submitted is
secondary and sourced outside the project area……”. This clearly means that the DoR has
tried to hoodwink the NEC by submitting an EIA report assessed (if at all) from an area
that was clearly not the project area. This has got to be criminal - and a case for the ACC.

Why is a government agency trying to deliberately submit false reports in order that they can do the road?

What desperation drives the Department of Roads and the Ministry of Works & Human Settlement to lie so blatantly to a regulatory authority?

One other thing: the government says that the construction of this illegal road will shorten distance by 100 KMs. What they fail to tell is whether shortening distance will translate into savings in travel time. Also they are very quite on the fact that the road will pass through a geographical area that is unstable and perilous, and that at one point the road has to pass through an altitude that has never been attained before. 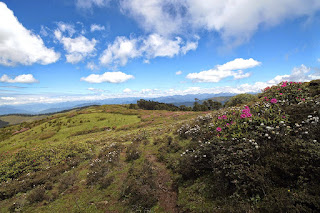 Singma-La Pass: If the Shingkhar-Gorgan road gets built, it has to pass through this high pass which is at 4,033M - nearly 253M higher than Thrumshing-La Pass. Singma-La is 153M higher than today's highest road point - Chele-La Pass.

What kind of environmental champions break laws to vandalize the environment? How far can we go with our “Bhutan for Life” when it is clear that we clandestinely scheme and plan to imperil life within the most protected areas?

We have to be careful what we do - if not the world will soon discover that our claims to being a carbon negative country, a land of happiness etc. is nothing more than the drum beats of the charlatans.