Zhabdrung Ngawang Namgyel: At Whose Feet One Submits

One of the most confusing historical records of Bhutan has got to be that of the highly celebrated and revered Tibetan lama Ngawang Namgyel, who arrived in Bhutan from Tibet in 1616. He is credited as the unifier of the nation-state of Bhutan – a claim that begs re-examination. I will deal with that in my subsequent posts on the subject. For now, I would like to deal with the title “Zhabdrung” by which he came to be known – both in Tibet and in Bhutan. 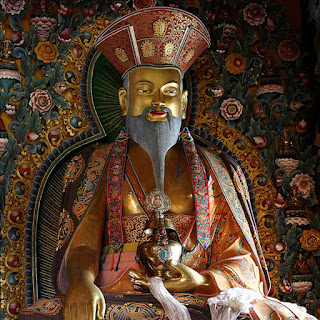 There are some who are adamant that he was given the title in Tibet before his arrival in Bhutan – as a birthright, being the 12th reincarnation of Kuenkhen Pema Karpo.

Others claim that he acquired the title “Zhabdrung” upon subjugation of the Shar region of Western Bhutan – completing the consolidation of the western regions of the country that would later come to be collectively known as Druk Yuel, or Bhutan. Upon unifying western Bhutan under the Drukpa rule, he is said to have issued the declaration of “Nga Chudrukma” – or the Sixteen "I's" – and thereupon assumed the title “Zhabdrung.” Translated, it means “At Whose Feet One Submits”. 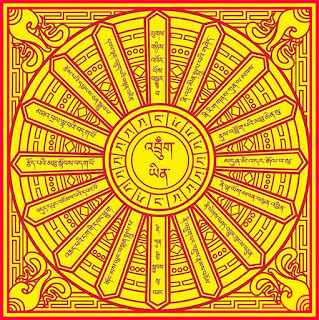 While the term “Zhabdrung” may have originated in Tibet, the word is said to have a wholly different connotation there – quite distinct from the meaning in Bhutan. As Dr. Yoshiro Imaeda has written in his book The Successors of Zhabdrung Ngawang Namgyel Hereditary Heirs and Reincarnations:

[I]n the broader context of Tibetan religious history, of which the Drukpa school is an integral part, the same title is quite frequently employed in other schools and to other monks. For example, as we will see later, the daughter of Ngor Zhabdrung Ludingpa is given officially as consort to Jampel Dorje but in reality served as consort to Tendzin Rabgye. In this context, the translation noted above does not make sense. D.P. Jackson translates the title as ‘the noble monk’. In a personal communication dated 8 December 1986, he explained the title as follows: ‘Regarding zhabs drung, generally speaking it refers to a monk from a noble family who is the successor to some high religious position, but who is waiting until the current occupant vacates the position. I think it is also used as a general term for a noble monk of high position, something like drung pa and spyan snga….. “Drung” refers to the candidate’s position “before” the incumbent, I suppose’.

Therefore, I tend to go with the view that the term “Zhabdrung” specifically means “At Whose Feet One Submits,” and should be considered Bhutanese – because it appears that only in Bhutan everybody submitted at Ngawang Namgyel’s feet. In Tibet, whether for political or religious reasons - whether for the wrong reasons or for the right reasons - his very position as the 12th incarnation of Kuenkhen Pema Karpo, which would legitimize his claim to the title, was hotly contested by a rival claimant - in the person of Gyalwang Pagsam Wangpo, and supported by Lhatsewa Ngawang Zangpo, an influential follower of Drukpa Pema Karpo - including the powerful Tsang Desi. In the end, whether in surrender or to escape prosecution, Ngawang Namgyel fled to Bhutan – where he was already held in high esteem and respected as a religious leader of great merit.