During the time of the unifier Zhabdrung, Bhutan comprised of two principal regions – the West and the East – colloquially known as Pele-La Pharchey (East) and Pele-La Tsurchey (West). The Western region provinces were Thimphu, Paro, Wangdue, Punakha and Dagana. The Eastern provinces collectively known as Sharchog Khorlo Tsibgye comprised of Trongsa, Bumthang, Mongar, Trashigang, Lhuenste, Trashiyangtse, Pemagathsel and Zhemgang. Both in terms of geographical as well as demographic size, the Eastern region was the larger of the two. And yet, there are no coins credited to this region although there were two Dzongpons that administered parts of the region: Tashigangpa (Tashigang Dzongpon) and Zhongarpa (Mongar Dzongpon). The reason could be that they were under the administrative control of the Choetse Penlop – right from the start of the first Choetse Chila Chogyal Minjur Tenpa to the start of the Wangchuck dynasty beginning with Trongsab Gongsar Ugyen Wangchuck.

The post of Choetse Chila which later came to be known as Choetse Penlop or Trongsa Penlop, was instituted by Zhabdrung Ngawang Namgyal, primarily to unify the Eastern regions under the central rule. Chogyal Minjur Tenpa was the first Choetse Chila appointed in 1647.

However, according to oral sources another Dzong known as Zhongar Dzong located near Lemithang in Mongar existed before the institution of Choetse Penlop. An account related to this Dzong reads as follows:

If this account is true, then Zhongar Dzong should have been in existence way before the institution of Choetse Penlop was established in the 1640’s. Based on another account of the Dzong, this is simply impossible. 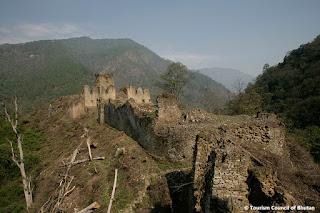 Regardless of what is true or false, one thing is for sure – there are no coins credited to Zhongar Dzong. On the other hand, there are records of each of the Dzongpons and Penlops of Trongsa, Thimphu, Paro, Wangdue, Punakha and Dagana striking their own coins, until the Wangchuck dynasty was established.