TAMRAPATRA of 1624 between Zhabdrung and King Ram Shah of Nepal

There is surely a hand of providence in my doing the history of Bhutan’s coinage. In the process of my research into the subject, I have come across discoveries that are uncommon and almost divinatory. Consider, for instance, my discovery of the following: 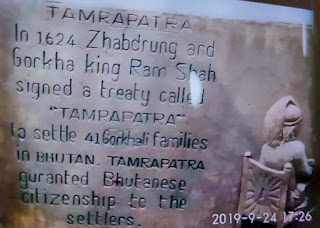 Sadly, the above refutes the written records that Chari Monastary was built in 1619-1620. It is recorded that Zhabdrung Ngawang Namgyal employed skilled Nepalese carpenters from Nepal, in the construction of Chari Monastery - his first monastery in Bhutan. Obviously the above Tamrapatra refers to that period. This ties in nicely with what Lam Kezang Chhoephel of APIC tells me - that the name Begana should be Balghar-Nang. Seemingly the Gorkhalese brought in during 1620/24 for the construction of the monastery were settled at Balghar-Nang above the present day Guru Lhakhang, close to Chari Monastery.

In his article on ancient Bhuan-Nepal relations, Dr. Suman Dhakal mentions about another visit to Kathmandu by the Zhabdrung, in 1640, during the rule of Dambar Shah when he brought back 40 to 50 Gorkhali families, led by their leader Bisan Thapa Magar. They were mostly artisans brought to help with the rebuilding/renovation of Dechenphodrang Dzong. The families were said to have been settled in places like Bebena, Pachu and Bel-Nang of Thimphu Valley.