The Emergence of the Idea of Paper Money for Bhutan

Every nanosecond, history is being made and remade and unmade, in some corners of the earth. The intention behind their making is not always premeditated – a good portion of them are accidental - pure chance and, at times, out of frustration. Ostensibly, one such history was played out in Paro – to be precise at Ugyen Wangchuck Academy in Satsam Chorten – possibly the earliest emergence of the idea of paper money for Bhutan, in place of the weighty and cumbersome cupro-nickel Tikchungs.

A verbal narration given to me by a friend goes like this:

Mr. Michael Rutland, currently the British Honorary Consul to Bhutan, joined Ugyen Wangchuck Academy in 1971 – as a Royal Tutor. He had to be paid monthly salary, which he believes was delivered to him on horse back - from Ugyen Pelri Palace in Paro. Her Majesty Queen Ashi Kesang Choeden Wangchuck wanted to make sure that Mr. Rutland got paid, and in time. Her Majesty instructed the late Finance Minister Lyonpo Chogyal to personally oversee the delivery of the salary – in the form of Tikchungs packed in cotton bags.

In keeping with Her Majesty’s orders, Lyonpo Chogyal ensured that the salary was delivered to Mr. Rutland in time and in the right amount. Not to say that they were any use to him – there was nothing that he could buy with them – even for a piece of cake he had to drive all the way to Swiss Bakery in Thimphu.

One evening Mr. Rutland met Lyonpo Chogyal at a dinner and he had the opportunity to thank him personally for delivering his salary in time. Lyonpo Choyal wished that there was a simpler way to deliver the salary - he wished that he could issue a written document signed and sealed by him to Mr. Rutland, and he could use it to purchase whatever he wanted. The conversation resulted in Mr. Rutland pulling out a British Pound bank note and showing it to Lyonpo and telling him that back home in England – they used paper money to pay for services and everything else. They were light and available in various denominations.

Although not educated in western education and their monetary system – the profundity of such a concept did not escape the old man Chogyal. The idea stuck with him and he began to ponder over the possibility of introducing Bhutanese paper money. Eventually, while it is not clear if he was responsible for the happenstance – Bhutan’s paper money got printed and issued, for the first time, in 1974. 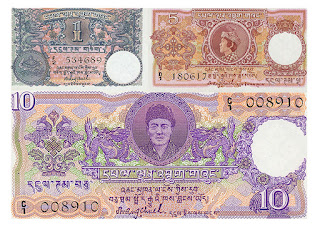 Lyonpo Chogyal is no longer alive but Mr. Michael Rutland is still around. I had the occasion to ascertain the veracity of the oral account as narrated above. He confirms that the account is accurate - to the last word.