Deciding the Obverse and the Reverse of the Ser Nya Maartam

Our Maartams were hammered a few centuries back – thus it is impossible to say with any degree of certainty which side of the coin was intended to be the obverse and which side the reverse.

I was for a moment perplexed as to how to decide on the following coin’s sides. Outside historians call this coin “2 Fish Coin”. But I am changing that. I am going to call this variety of coins – the “Ser Nya Maartams” because one side of the coin depicts one of our Tashi Taag Gye (8 Lucky Signs) – the Ser Nya. The other side depicts the Bengali/Assamese term “Dhra”. 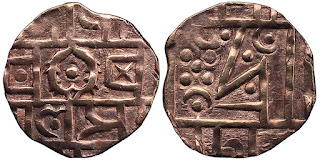 Ser Nya Maartam with a Cross on the Obverse

Thus, since the Ser Nya is more important to the Bhutanese than the Bengali/Assamese “Dhra”, we should, therefore, designate the side with the Ser Nya as the obverse of the coin.