Matt Walker, Editor, Earth News of BBC writes in (http://news.bbc.co.uk/earth/hi/earth_news/newsid_8998000/8998042.stm) that experts have been “stunned” by the “discovery” of tigers living and breeding at higher altitudes than were believed possible. He further goes on to say that “their presence in the Bhutan highlands has been confirmed by footage taken by a BBC natural history camera crew.

These are very strange remarks, particularly coming from the editor of Earth News of the respected BBC.

What kind of people can claim to be experts if they have obviously been clueless about the knowledge of the tiger’s existence in Bhutan for the past many centuries? And what shameless persons can make a claim to having captured the first footage of the tiger when photographic evidence of their existence has been recorded over a decade back?

The recent release of film footage by the BBC showing tigers in Bhutan seems to have created some kind of stir in the western world. The truth is that there is nothing so earth shattering about tigers in Bhutan. The Bhutanese people have been living with them for the past many centuries. Even while we lose many heads of cattle to the tiger every year, we still revere them as the riding stallions of our many protecting deities. The tiger population proliferates in Bhutan because the Bhutanese people do not harm them with the belief that they are under the protection of our protecting deities. In order to protect the tiger, the government of Bhutan even offers cash compensation to farmers who lose their livestock to the tigers.

It is totally false and unethical on the part of Gordon Buchanan of the BBC to claim that his footage is proof of tiger’s existence in Bhutan. The truth is that a wildlife survey team from the Bhutan’s Nature Conservation Division captured an image of a tiger on camera trap in September of 1999. The image was recorded at an altitude of 3,400 Meters. Kuensel did an extensive article on the sighting of the tiger in their issue of May 6-12, 2000 Vol. XV. No. 18. 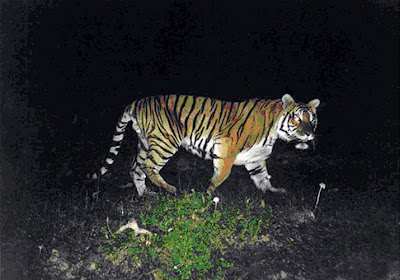 Image of tiger captured on camera trap in 1999
It is also not correct that there has been no evidence of the tiger’s existence above 4,000 Mtrs. The NCD has records of the discovery of pugmarks at Puchela in the Thrumshingla National Park which is at 4,110 Meters.

It is not fair that the BBC team does not acknowledge the immense contributions made towards the tiger’s conservation by individuals and organizations such at the NCD, WWF and the Save the Tiger Fund who have been working at the tiger’s conservation and protection since the early 1990’s. They even do not make mention of the assistance provided by the local Bhutanese team who must have helped them acquire the images. Without the knowledge base of the local people and organizations, it is impossible that the BBC team could have filmed the tigers as they claim to have done. It is common decency to give acknowledgement where due.

The following is an image supposedly that of either Mongol warlord Gushri Khan or that of Lhasang Khan. He is seen holding what is obviously a Royal Bengal tiger. Rinchen Khandu, a local authority on Bhutanese folklore and religion tells me that these two Mongol warlords attacked Bhutan sometime during early 1600’s after the arrival of Zhabdrung Nawang Namgyal in Bhutan. He says that this image is generally painted next to the main entrance of a house, Dzong or temple. Rinchen Khandu explained to me that any house or temple or Dzong on which were painted these images escaped the wrath of the plundering Mongol armies because they believed that the house was under the protection of their lords. 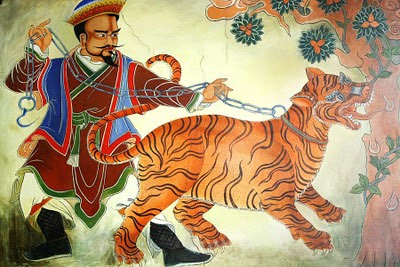 Gushri Khan/Lhasang Khan painted on the wall of the Jumolhari Hotel’s dinning hall
The above image is further proof that tigers were found in Bhutan even before the 1600’s. Obviously, the venerable BBC can no longer be trusted to be a source for factual and dependable reporting.

Email ThisBlogThis!Share to TwitterShare to FacebookShare to Pinterest
Labels: Conservation