My Comments On The Proposed RTI Bill

As a concerned citizen and in an effort to help the government and the Parliament to look at the practicality and usefulness of introducing/enacting the RTI Bill in the upcoming Parliamentary session, I would like to offer my following views on the issue.

When a certain Bill or Act is considered for introduction in the Parliament for discussion and final enactment, it comes about because there is a NEED for such a Bill or Act. Therefore, the first question to ask is:

IS THERE A NEED FOR SUCH AN ACT/BILL?
>  How did the need arise?
>  Was information denied?
>  What percentage of the Bhutanese population desires the RTI Act?
>  What do they understand about the benefits of the RTI?
>  Will it improve transparency and impartiality?
>  Is there a popular demand for the Bill from the people of Bhutan?
>  Was the requirement for such a Bill discussed among the people and does it
find popular appeal among the respondents?
>  Most importantly, which segment of the Bhutanese society will the RTI Bill benefit?

Bhutan has too many laws that most even do not know they exist. Most often, we enact laws that we are unable to enforce - in some cases we have even failed to fix responsibility as to which agency should enforce those laws. It has also happened that some of our laws are donor driven and not necessarily appropriate to the times we live in. We enact laws simply because they look good on paper and render some bit of statistical opulence in the eyes of the visiting consultants. As a result, laws continue to be broken, ignored and unenforced - resulting in the famous Bhutanese lackadaisical attitude towards law.

During end May, 2012, the Ministry of Information and Communications held a two-days Awareness seminar on RTI at Terma Linca - where I was a participant. Strangely, the tone of the seminar bordered on RTI activism - a far cry from being a seminar about imparting awareness on RTI. I was aghast at the fact that one of the resource persons was a well-known RTI activist! The entire two-days seminar emphasized the urgent need to enact RTI Act in Bhutan. I was the lone voice in that seminar opposing the visiting experts and their view that Bhutan is in urgent need of RTI Bill - to the point that during lunch break the World Bank representative offered to console me by saying that the seminar was fortunate to have my negative voice - to which I responded that notwithstanding the voices of the activists, as far as Bhutan was concerned, mine was the positive voice. 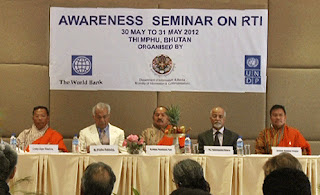 I bring up this issue because we need to answer one question truthfully:

Is the government and the proponents of the RTI Bill convinced that there is a genuine need for RTI in Bhutan? Who is demanding it? How many citizens are suffering as a result of lack of RTI Bill? Do stray incidences of denial of information warrant the legislation of a law the implications of which few are able to comprehend? Or, are some interest groups driving the RTI movement in Bhutan?

To be perfectly frank, I am wary because of the involvement of some outside organizations who are trying to decide that the RTI is good for Bhutan - without first allowing the Bhutanese people to understand if it is right for us. I request that the Parliamentarians exercise utmost caution in yielding to their pressure because only Bhutanese can determine what is good for us. They are driven by their own agenda - do not let them convince us, as opined by one of the resource persons during the awareness seminar under reference, that the window of opportunity is only minimal. As long as we have the political will and as long as we are ready for it, the window of opportunity is boundless.

The following are my views:

There are 196 countries in the world. Of that many, less than half - 93 countries to be precise - have so far adopted some form of RTI.

So what is the hurry for Bhutan? We are not even 6 years into Constitutional Monarchy. Even more important, we are still in a state of confusion as to what constitutes freedom and what our responsibility is, in the exercise of that freedom.

Assurance of RTI goes beyond merely enacting a law - the delivery mechanism should be put in place before the law is enacted. This means that when information is sought under the law, information must be available in a deliverable format and at locations that are readily accessible. Do we have that? If not, how will the law work?

Therefore, to me it seems like the first order of things is to discuss in the Parliament not the RTI law - but feasibility of the creation of institutions and manpower and infrastructural set up to prepare for the enactment of the RTI Bill. If not, it will be a case of putting the cart before the horse. If the law is to be effective and useful, we have to first create the environment for it to be implemented and enforced. Thus, we should begin by first getting the Parliament to approve, if parliamentary approval is required, to establish the necessary infrastructure and manpower to assimilate the RTI culture among the people and the custodians of the information.

Appointment of IMO’s and support staff is the first step. Then comes their training in the use of specialized equipment to record, digitize, archive and retrieve the stored information. We have to decide on and standardize the medium of storage and retrieval system. We have to determine the most efficient method of gathering and compiling and encoding the existing information, which is mostly in hard copy, spread over the length and breadth of the country and stored away in files.

Creation of the facility as described above will require immense financial outlay. Do we have that? A budgetary allocation of anywhere from 200 to 600 million will be required - to train few hundred operators and IMO’s and to buy hundreds of devices for storage, scanning, microfilm, microfiche, readers, encoders, photocopiers, computers, printers etc. and software to implement them. Do we have that kind of money?

Given all the above, it is my view that we do not even look at the proposed Bill for now - but start by discussing the creation and affordability of putting in place the enabling conditions to assure the success of the RTI Bill - when it is finally enacted. If not, it will be one more law that is enacted but not enforced.

We have to remember that some laws are more effective when they are left ambiguous - then when they are enacted into law - with a hundred explicit clauses. My experience is that those well-meaning clauses can be used as a deterrent rather than as something stipulated to facilitate efficiency.

We Bhutanese are great hoarders of information - for how our mind works, please read my Blog article titled “RTI & The Bhutanese Mentality” posted on Thursday, April 7, 2011. It is filed under “Legislation” http://yesheydorji.blogspot.com/2011/04/normal-0-false-false-false_07.html

Email ThisBlogThis!Share to TwitterShare to FacebookShare to Pinterest
Labels: Legislation