My Final Post On Keeping Chamkhar Chhu Undammed and Free-flowing

Since the government has announced that they are unwilling to keep Chamkhar Chhu free of dams, this will be the last post I will do on the issue of keeping one of our rivers free of dams. As a concerned citizen, I have tried to do, what I believe, is best for the country and the people of Bhutan. The rest is now up to the King, the government and others who I know are as concerned as I am about the need to keep one river free of dams.

For me, this is the end of the road. However, for the cause .... one never knows. Life is full of surprises. 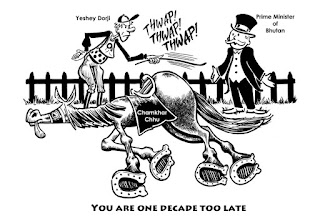 The following is the full version of the email interview KUENSEL did with me. While I will keep on writing on issues related to hydro-power, I will not write any further or give interviews on the issue relating to keeping one of our rivers undammed and free flowing.

As you might have read, the Prime Minister has said that the petition/debate is a decade late and should have been raised before the governments of Bhutan and India signed the Chamkhar Chhu agreement. How would you respond?

Yes, I have read the Prime Minister’s statement to the press during the government’s 19th Meet-the-Press session.

I am a little aghast that the government should decide to slam the door in my face, even before I knocked on it. As far as I am concerned, I have not yet submitted my petition to the government. Infact, I did not think that it would be necessary to submit the compiled petition because I believed that they would surely understand and empathize with the profundity behind my plea to keep the Chamkhar Chhu undammed and free-flowing in order that the same can be bequeathed to the name of His Majesty the Fourth Druk Gyalpo in the year of His 60th Birth Anniversary. The government should not need a voluminous petition to do a worthy cause, should they believe that it is indeed a worthy cause.

I am aware of the existence of an agreement between Bhutan and India but that agreement is now untenable. According to the agreement, we are supposed to do 10,000 MW by end of 2020. We are nearing end of 2015 and not a single one of those ten projects have come on stream. In fact, six among them are still on the drawing board.

Unless Bhutan is under duress from India to do the Chamkhar Chhu Hydropower project specifically, I am sure that if a proposal is made to them, India will find it acceptable to choose another location from among 76 economically viable locations that have been identified under the 2004 Updated Bhutan Power System Plan. After all it is our hydro-power project and we should have the first and final say. We are not asking to curb the overall agreed generation - if that be their concern - merely that another location be selected in order that we can leave Chamkhar Chhu undammed and free flowing in eternity and bequeath it to our most deserving Monarch. I have no doubt that since India is coming under increased criticism from the international community given their environmental record, they will be equally recognized for partnering with Bhutan in our efforts at ecological and environmental conservation in a region that accounts for Asia’s largest fresh water supply.

It is never too late to correct a mistake. We all know and accept that this government was not a party to the hydro-power agreements of the past. However, feigning helplessness is not the way of a responsible government. The PDP government has been elected to be the chosen one, when the Bhutanese people pronounced their desire for a change in governance. If the same old policies are to be perpetuated, and same old mistakes continue to be made, how have the PDP government lived up to the people’s expectations?

Your plea that Bhutan should leave at least one river un-dammed, and the derivative arguments (economic benefits, environment) will go unheeded by the government. Are you still going to submit your petition to the government if you obtain 500 signatures?

No, I won’t be doing that because, as I said earlier, I did not contemplate submitting the compiled petition to the government in the first place. That is why from day one, I disabled the button on the website that would have sent an E-mail to the Hon’ble Prime Minister - every time a supporter pressed the support button.

The government has been explicit that the Chamkhar Chhu project is a done deal and that there is no room for discussion. Regardless, it is my hope that the government will still leave open a small window of opening for reconsideration and recapitulation. That said, at the end of the day, should they decide not to, they are the government of the day and it is their call. It is not as if I am the only one that is concerned about this country’s future and well being. I know that there are others who are even more concerned than me.

However, it is sad that I did not hear a single one of our various environmental organizations voicing their concern at the devastation that is being caused to our environment. Not one of our many environmentalists have come foreword to publicly contest the false claims made by the political leadership and the hydro-power proponents that our dams are environmentally sound. Not one has refuted the falsehood that is being put out - that our dams will not emit green house gases such as Carbon Dioxide, Nitrous Oxide and Methane, the principal causes of global warming. Not one has challenged the lie that all our hydro-power projects are run-of-the-river projects. Not one of our many learned economists has spoken against the economic peril, the debt burden and outrageous interest rate charged on the loans and the unsustainable manner is which we do our hydro-power projects.

Your petition caused a lively debate within Bhutanese society and it seems public opinion is divided. You've failed to convince the government but are you in anyway satisfied about some of the outcomes of your petition?

Frankly I know nothing about any outcome from this. However, I like the fact that my cause has sparked off a vigorous debate on the issue but those debates have been in the Facebook, where I am not.

I will be satisfied if some of the following emerge from these debates:

a.    The engagement of professional lawyers in going through the
fine prints of the agreements before it is signed. From what
we have seen happening in Punasangchhu I & II and
perhaps even in Mangdechhu, it is evident that the negotiating
team from Bhutan were sleep walking when they signed
those hydro-power project agreements;

b.   That the government ensure that clauses in the
agreements protect the interests of the Bhutanese
business community and the local manufacturing industries;

c.    That further hydro-power projects is suspended - until
all the projects currently in the pipeline are completed and
fully commissioned because if we don't, I fear that
our economic woes will be further compounded; and

d.    Ensure that all future DPRs are done professionally and
then cross-checked by independent consultants to ensure
that the studies have been carried out properly and that
repeated geological surprises are not a norm.

Many from Kheng did not agree with your petition. Have their arguments in anyway softened your stance or thrown new light on your point of view?

No - their arguments were complete nonstarters. In any event, when talking of a national level concern, localized issues are of no consequence. I am completely appalled at the assertion that the Chamkhar Chhu project will bring roads and schools and hospitals and electricity to Khengrig Namsum. There is something sinister about some of the Khenpas’ insistence, even while they are fully aware that this has not been the case in every single one of our earlier projects. They talk as if provision of these services is in the mandate of the project, thereby totally misleading innocent people.

By the way, I would like to once again reiterate that my intention was to keep one river undammed and free flowing, for future generations and, perhaps, for the reason that it may afford us an alternative to hydro-power. Chamkhar Chhu Hydropower project was furthest from my mind. For me it is a none-issue.

Are you planning to continue to petition against the dam? If yes, what comes next and why?

Once again, I wasn't petitioning against any dams. I was appealing to keep one river free flowing - assign to nature what is rightfully nature’s.

No, I will not continue because the government has been categorical that they will not consider it. To continue in the face of such steadfast resistance from the all-powerful government would be nothing short of flogging a dead horse. The government has the people’s mandate and they are the ones who should be satisfied that they are performing their duties with sincerity and in good faith, as mandated by the people of Bhutan.

I, and my aspirations, are incidental.