Our River of Hope

Ours has been a long, long journey of hope, and of optimism. Since the time the spark of hope was ignited in 1974 when the first agreement on hydro-power was signed between Bhutan and India, the dream merchants have never for once allowed the twinkle in ours eyes to dim nor optimism to wane. Two generations of Bhutanese remained hypnotized and mesmerized with promises of untold riches, of streets paved in gold and a life filled with luxury and abundance.

Until the bubble burst!

We have walked a million miles since 1974 - to arrive at the point of disaster that we were too trusting and naïve, to foretell or comprehend. Today, the hydro-power bubble has burst and our dreams remain dashed and hopes unfulfilled. We find ourselves straddled with hydro-power borrowings that is in excess of our entire GDP and yet, we still dare tread the quicksand of debt and disaster, with aplomb and gallantry!

Our leaders seem to draw solace from two magic words that they keep throwing at us - “Cost-Plus” and “Self-liquidating”. They must take us for complete dullards, or they are clueless about the mathematics behind those catch phrases.

Our young King the IVth Druk Gyalpo put the country on the road to progress, after less than two years of ascending the Golden Throne. He envisioned that the country’s enormous hydro-power potential should serve as the vehicle on which would ride His aspirations for His subjects’ and Kingdom’s progress and modernization. Forty years since, that vision lays trampled in the dust.

Most of our life-sustaining rivers are shackled with hydro-power dams, displacing humans and wildlife, as well as rare and unknown aquatic life forms.

Some of the dams that are planned and under construction are destined to create huge water bodies that will alter weather patterns and cause earthquakes, due to their location in seismically active zones.

There is clear and present danger of environmental disaster waiting to happen.

Unfavorable and inequitable terms of project execution have caused a number of Bhutanese businesses to fail. Even vegetable vending has been usurped by Indian project contractors thereby depriving Bhutanese of small business opportunities.

Hundreds of children born out of wedlock to Bhutanese mothers but fathered by Indian project workers, roam the streets - without census registration and without the right to schooling. Because our gender biased laws do not recognize Bhutanese mothers as worthy citizens, their offsprings are not recognized as natural citizens of Bhutan. Over time these stigmatized children will harden their attitudes towards the state that have rendered them stateless - and declared them persona non grata - resulting in fomenting of bitter resentment and indignation. 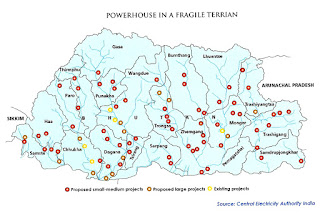 The implementation of the above plan clearly shows that we are going to dam every single one of our rivers. This is an irresponsibility of colossal proportions. We cannot do this to our future generations of Bhutanese who have every right to inherit what we have, from our forefathers. We have already burdened them with enough debt to last many life times.

To dam every single one of our rivers is perilous! Doing so will leave us with no reference point to go back to - for study in aquatic biodiversity and other scientific studies. We must have atleast one free flowing river - to serve as a conservatory for various known and unknown aquatic gene pool. We must, at any cost, leave one of our rivers free flowing in perpetuity.

And, I elect CHAMKHAR CHHU as that river.

I choose Chamkhar Chhu because as of now this is the only major river over which a dam has not yet been built. It is still free flowing. I am aware that a DPR has already been done to start a project on this river. However, we can afford to sacrifice the project for the sake of our children’s future. Let us not worry about the cost of the DPR that has already been spent. By the time the Punasangchhu I & II are done, we will have lost over Nu.100 billion. As opposed to that the cost of the DPR is small change.

Chamkhar Chhu has all the right credentials. Thus let us resolve to bequeath it to the giant among men - our IVth Druk Gyalpo His Majesty Jigme Singye Wangchuck - the environmental champion without parallel.

Let us do so as a gift to Him on His 60th Birth Anniversary. Let it be a gift from a nation full of grateful subjects for His selfless service and for His dedication. If the nation and its people have resolved to do something during His Birth Anniversary, let that something be one that will endure for eternity. The free-flowing Chamkhar Chhu - from the base of Mt. Gangkhar Puensum to the estuary of Manas in the South - will be fitting validation of our gratitude to a King who has forsaken so much for the freedom, progress and contentment of His people.

The Chamkhar Chhu originates at the base of another giant - Mt. Gangkhar Puensum. It is Bhutan’s highest mountain and the world’s highest unclimbed peak. The river is host to a number of endangered species such as the Golden Mahseer and the Golden Langur, in addition to a large number of rare birds. The river runs through three national Parks: Wangchuck Centennial National Park, Thrumshingla National Park and finally through Royal Manas National Park. 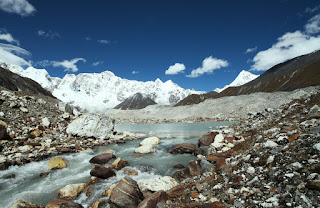 The lake at the base of Mt. Gangkhar Puensum from where the Chamkhar Chhu starts Chamkhar Chhu with Mt. Gangkhar Puensum in the background 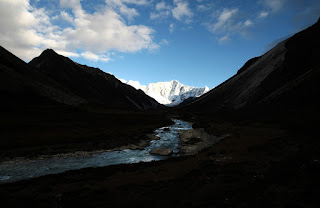 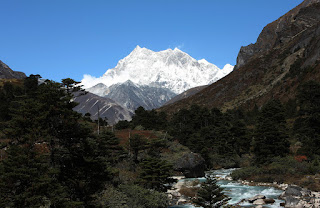 Bequeathing Chamkhar Chhu as a gift to His Majesty the IVth Druk Gylapo would be worthy restitution to a monarch who has been selfless in his duty to His people and unequivocal in His stewardship of our environment.

If you believe that to be true, say yes to the dedication of Chamkhar Chu to His name and allowing its free flow until end of eternity. Sign a petition at the following:

I appeal to your sense of responsibility, your accountability and your sense of dedication, to honor our King with something that is more permanent and enduring - way beyond the erection of gates and planting of flowers. Let us go beyond lip service and the mundane, and come together in our resolve to do something more meaningful and befitting a person who has been boundless in his sacrifice for our country and us.

Let our appeal to the Druk Gyalpo and the government be our swansong - a final reminder to ourselves, that we cannot feign ignorance when finally, every single one of our rivers are dammed and environmental and financial disaster strikes us.

Show your support to this cause at: