Currently I am chasing the truth on when exactly coining began in Bhutan. Some say 1790 - others say something else. I am now even confused about the term “Matang”. I was dead set on calling it “Maartang” with the belief that the word is an amalgamation of two separate words: “Maar” = Red …. “Tang” = coin. But now I find that would be completely wrong – because the term “Matang” was used even before the time of Zhabdrung. There was no red colored coins then.

To add to my confusion, another very rarely used term popped up: Nyingtang Gatikha. This is said to be a silver coin hammered in a mint in a place called Gatikha.

The reason and the tradition behind the observance of holiday on the first day of snow.

His Majesty Jigme Wangchuck used to spend his summer months in Domkhar and Wangdichhoeling Palaces. Winter months were spent in Trongsa Dzong, Thruepang Palace, but mostly in Kuenga Rabten Palace. 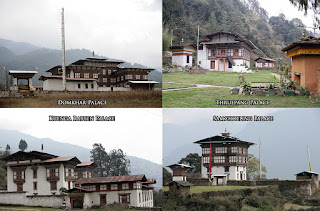 After the first day of the arrival of snow in Domkhar, His Majesty King Jigme Wangchuck would serve a grand feast to all the Boegarps and Zingarbs and the Chaangarps serving at the Dzong. He would then announce that from next day they could go home for a break.

The above historical account was narrated to Lam Kezang Chhoephel of APIC, by the late Sonam Wangdi of Koortoe Jarey who served in the courts of both the 1st and the 2nd Kings. He was a member of the inner circle of the 2nd King – known as Nungsheb. He began as a Tohze at the age of 13, to fill-in for his deceased father who also served as a Chaangarp at the court of the first king.

His Majesty the third king was born in Thruepang Palace.

In keeping with tradition, on the seventh day of his birth, the child prince Jigme Dorji Wangchuck had to be taken outside in the open air. The most trustworthy, virtuous and providential person was chosen to carry the child prince.

Sonam Wangdi was chosen for the honor. In appreciation for that act, Her Majesty Phuntsho Choden would gift Sonam Wangdi two woven Thermai Gho and Nu.3,000.00 every year, until his death in 1980.

Sonam Wangdi was also a member of the retinue of over 300 who accompanied Trongsa Poenlop Ugyen Wangchuck during his visit to India in 1906. Of the number of places the entourage visited in India, Sonam Wangdi recalled visiting the Gatikha mint. In his words, Sonam Wangdi described the sound of minting, thus:

It is amazing that Gatikha Mint was still operational in 1906. I will need to cross check this. The sound “Graap …. Tsing” appears to describe the minting of coin on a mechanized coin press, and not the sound of hammering. The sound “Graap” would denote the sound of pressing the planchet and “Tsing” would be the sound of the finished coin hitting the ground or on to a pile of coins inside a holding ampule.