Bhutan’s coins were hammered some 310 years back – thus it cannot be said with certainty which side of our coins was intended to be the “obverse” and which the “reverse”. Thus I believe that we will have to rely upon our own power of reasoning as to which should be which.

In an article by John Deyell titled “Reflections on “Obverse” and “Reverse” in numismatics, he writes:

“The implication is that each has a “front” side that is by the standards or conventions of the industry somehow more significant, higher-quality or otherwise of greater importance, than the other side, the “reverse” side. Where the medium bears information, as is the case with coins, banknotes, printed pages or discs (double-sided DVDs, etc.), the obverse or front is the side on which the message begins and the reverse carries the remainder of the information.”

“The only solution is for scholars to define obverse and reverse in terms of the priorities they consider most important and then be consistent in their own work”. Probably a good last word on the subject!”

I had difficulty in deciding which should be considered the obverse and which the reverse of our coins – or more simply which should be the front side and which the back side. I spent many months brooding over the matter. I consulted a number of experts, writers and historians across the globe. But at the end of it all, it was really very simple - there was nothing so complicated about it. 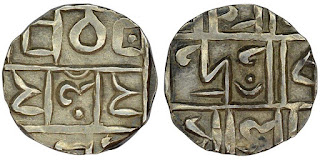 Half Silver Rupee of Maharaja Devendra Narayan of Cooch Behar

Thus for us too this rule should apply – because Lord Shiva is also considered God in our religion. He is known in our religion as “Lha Wangchuk Chenpo” – sometimes also called “Wangchen Deva” or simply “Maha Deva”, among others. 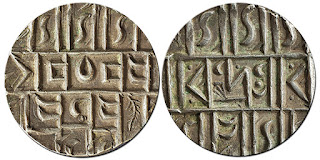 Bhutan's silver "Sa" Ngueltum - one of the very few coins with full die-sized planchet
The side with the "Ndra" cannot be considered obverse for the Bhutanese since it carries the name of a Koch king. This will be in keeping with the order of importance - God first!