Yet Again, The Shingkhar-Gorgan Road Rears Its Ugly Head

Towards the end of their tenure in 2013, the erstwhile DPT government had realized the folly of their intentions and had quietly terminated the construction of the proposed Shingkhar-Gorgan bypass. The agencies such as the NEC and the Department of Forestry, including some environmentalists, who have been vociferous in their resistance to the idea of this road, heaved a sigh of relief that something unlawful and potentially catastrophic had been brought to its just end.

Exactly one year later, the ruling PDP has again resuscitated the foolhardy venture. But this time they are smart enough not to promote the idea that it is a farm road because it certainly does not fulfill the prescribed guidelines for construction of farm roads. 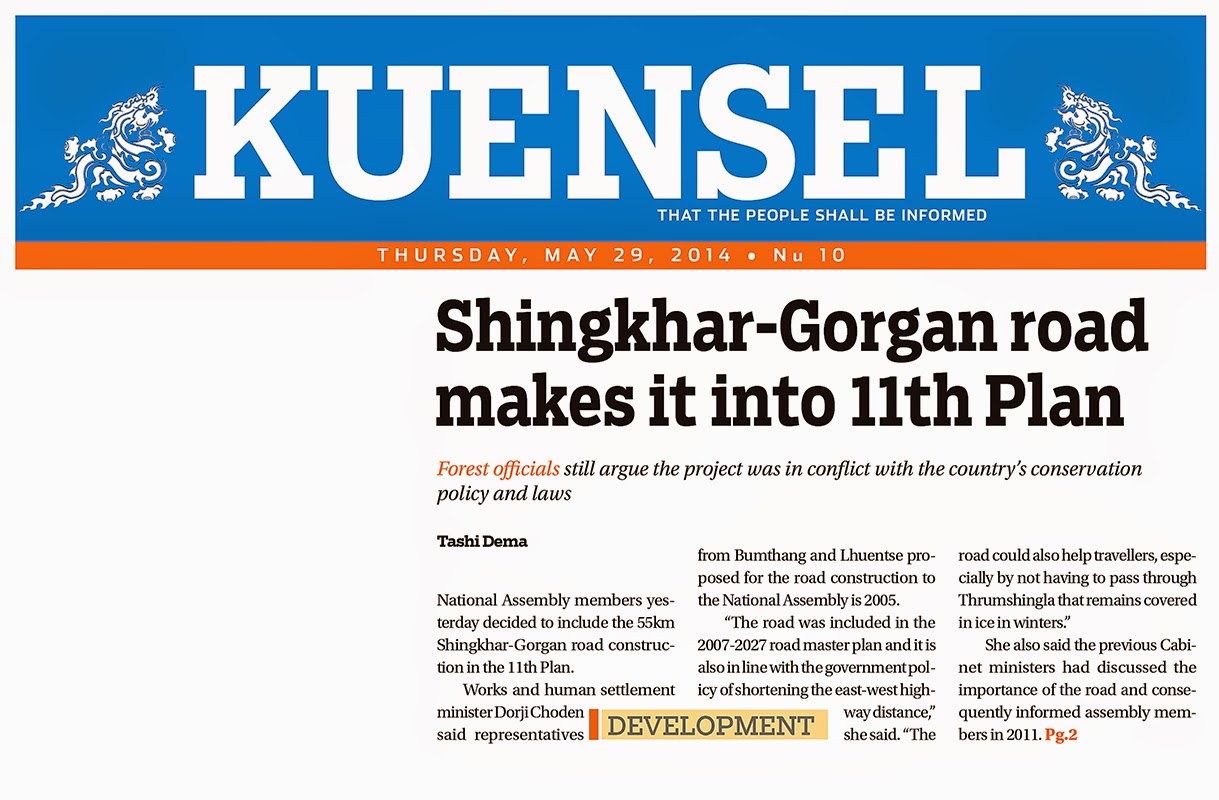 However, this time round, the government does not seem to be all that educated in what they are putting out to the public. The Works and Human Settlement Minister has come on record to state that: “The road could also help travellers, especially by not having to pass through Thrumshingla that remains covered in ice in winters”. This flagrant misinformation can only mean that the Minister has not been told the truth - that Singma-La, over which the Shingkhar-Gorgan road needs to pass, is even higher than Thrumshing-La pass. If the Minister was appropriately appraised of the real situation, she would understand that the incidence of snow and icing on the road would be even more severe at Singma-La than that encountered at Thrumshing-La pass. Are some interest groups intentionally misguiding the government with false information and withholding of truth?

The other reason given is that it will shorten travel distance from the East to the West by about 100 Kms. That is a good reason to consider the road - except that there is some mathematical error in the calculation of the distance. According to what I know, the distances are as follows:

Even beyond the numerical error, what the ruling government and its concerned Ministry has not been told is the fact that the ascend from the valley at the bottom of the mountain to Singma-La requires a total of 26 zigs or bends or turns - before hitting the Singma-La top! You can well imagine the gradient of the road! To my memory, there is no road in Bhutan with that kind of steep gradient. This should tell you the kind of geography and topography you are dealing with. To carry out so much cutting into the mountainside will destabilize the already fragile soil structure of the area. Additionally, I am told that this area is most of the time shrouded in mist and fog. Therefore, even if the whole mountain does not end up at the bottom of the ravine, the road will remain perilous and unusable most of the year.

Therefore, even if we were to accept that the distance would be shortened, what will be the volume of traffic the road will carry? Has the government done a cost benefit analysis of this venture? Would it justify the tens of billions of Ngultrums that will be spent in the construction of this road?

Is it enough that the people of Lhuntse makes a request to the Works and Human Settlement Minister and the government has the wherewithal to grant them that kidu? The government has to be mindful of the fact that there are parts of the country where there are no roads at all - let alone a road that can get them to the West in the quickest of time.

In recent times, the Bhutanese lingua franca has been permeated by a newly coined phrase: geological surprise! This new coinage attempts to justify and condone the expensive disaster at Punasangchu I, the consequences and implications of which the Bhutanese people do not seem to fathom or be bothered about. On the floor of our Parliament, elected leaders speak with practiced deftness, of geological surprises as something commonplace and as an act of God that deserves compassion, understanding and forgiveness.

No one is being held accountable for the horrendous disaster; no one seems to point out the fact that such “geological surprises” are not acceptable in a project the size and scale of Punasangchu I. No one seems to care that the project authorities had obviously failed to carry out proper investigation to safeguard against such surprises.

In all likelihood, the geological disturbance caused by the construction of the stretch of road between Singma-La and Zhongmey will cause the entire mountain to collapse at the bottom of the ravine.

Does the present government hope to be indemnified of all blame - because this too can be conveniently written off as another “geological surprise”? I don’t think so, because in this case, fair warning has been given - that the venture is unlawful, meaningless and environmentally disastrous.

The erstwhile DPT government saw through the futility of this undertaking and stopped it in time, at the behest of the people whom they represented. I urge the present government to do the same. Even if not entirely - until a thorough investigation is carried out and until after amending the law that currently prohibits construction of any kind within the core park areas.

The construction of this road was, and still is, a great concern to all of us who care for the environmental health of this country. In June of 2013, I trekked up to Singma-La top - to see for myself what was involved. The following photographs will tell a small bit of the larger story that is the Shingkhar-Gorgan road. 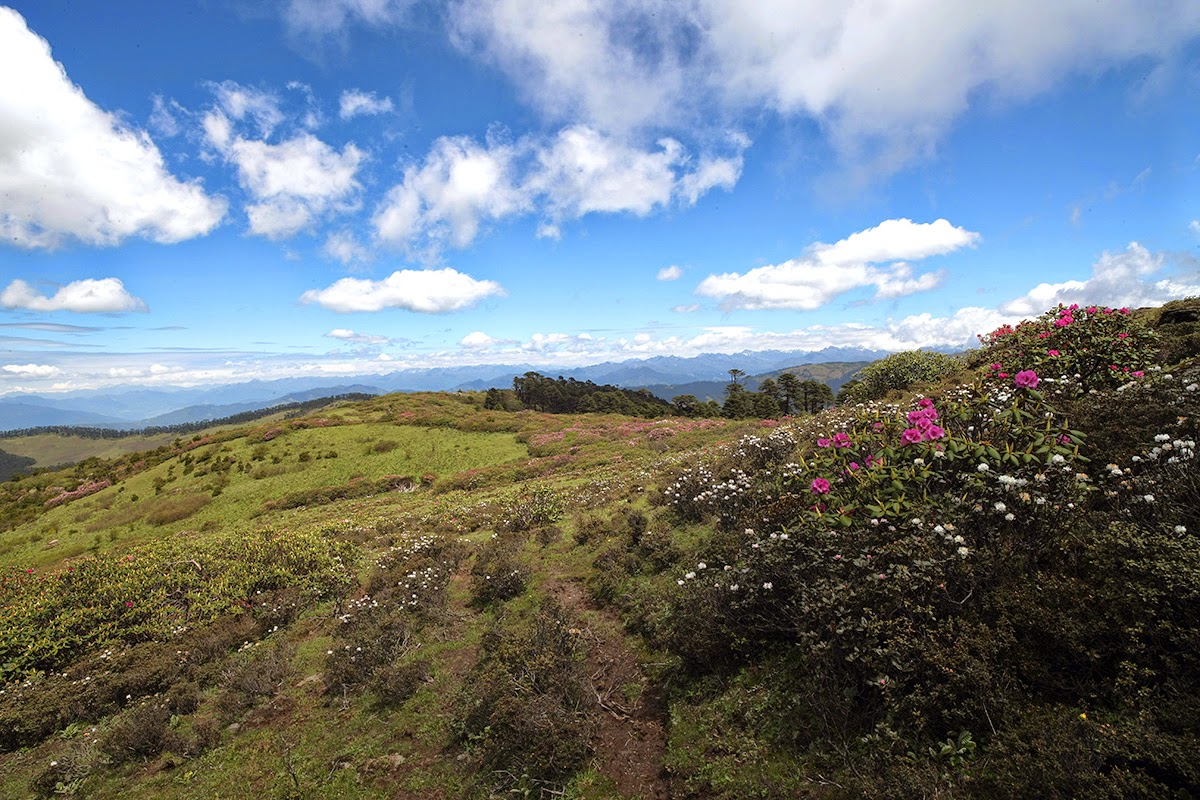 The Singma-La Pass. One can see that the pass is way above the tree lines meaning it is over 4,000 Mtrs. 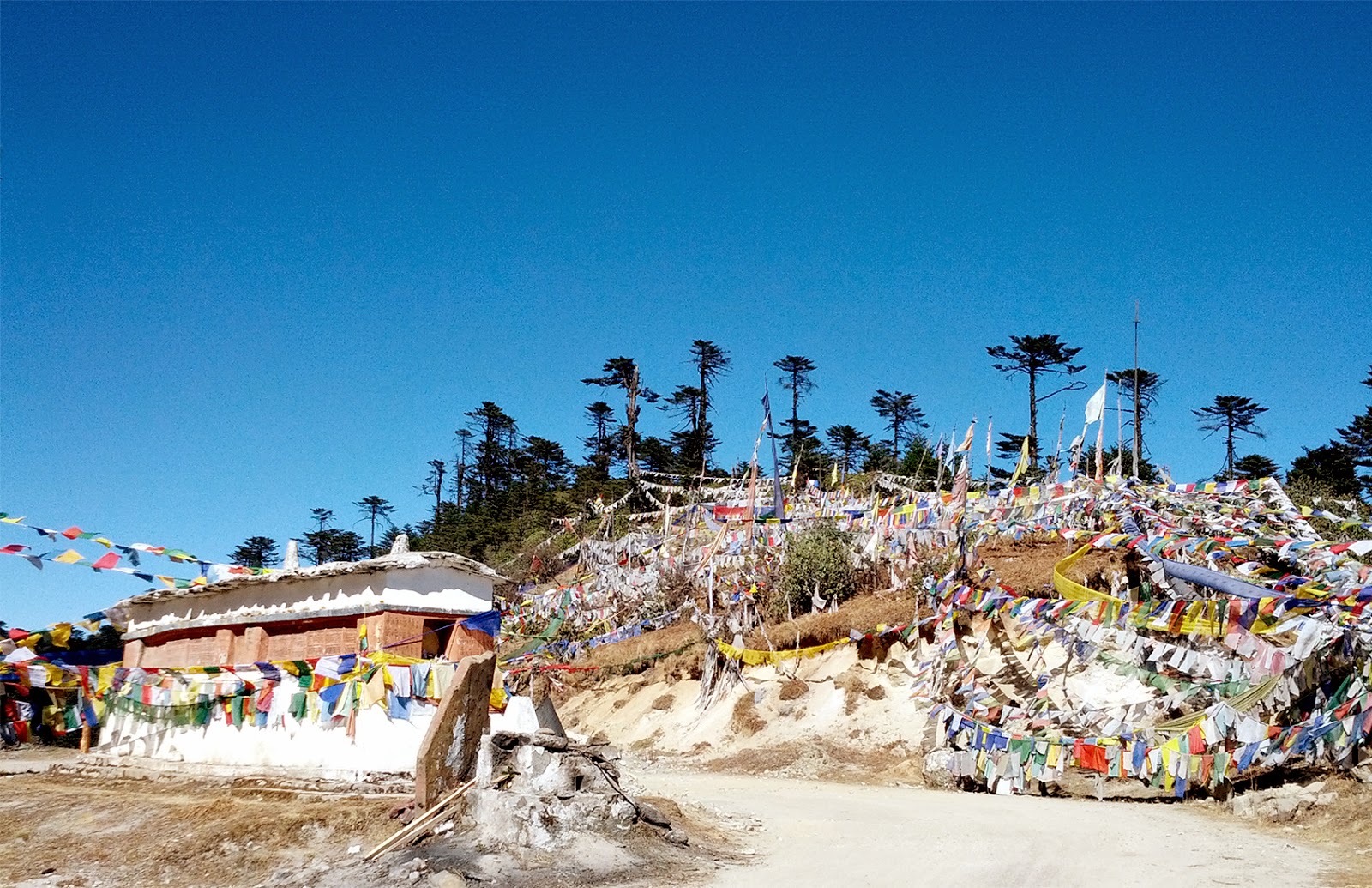 View of the beautiful Shingkhar Village from atop the Singma-La. 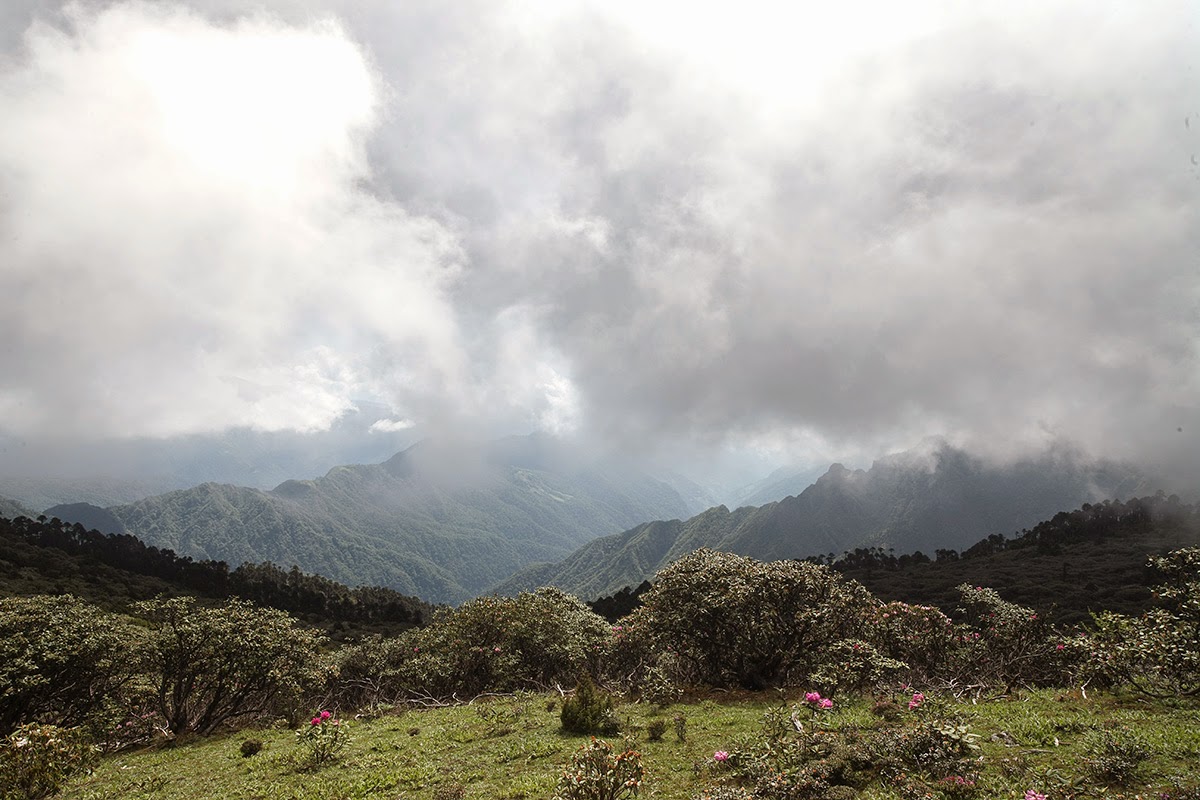 The endless wilderness between Singma-La Pass and Pelphu Goenpa through which the run will run, if the construction is to resume. 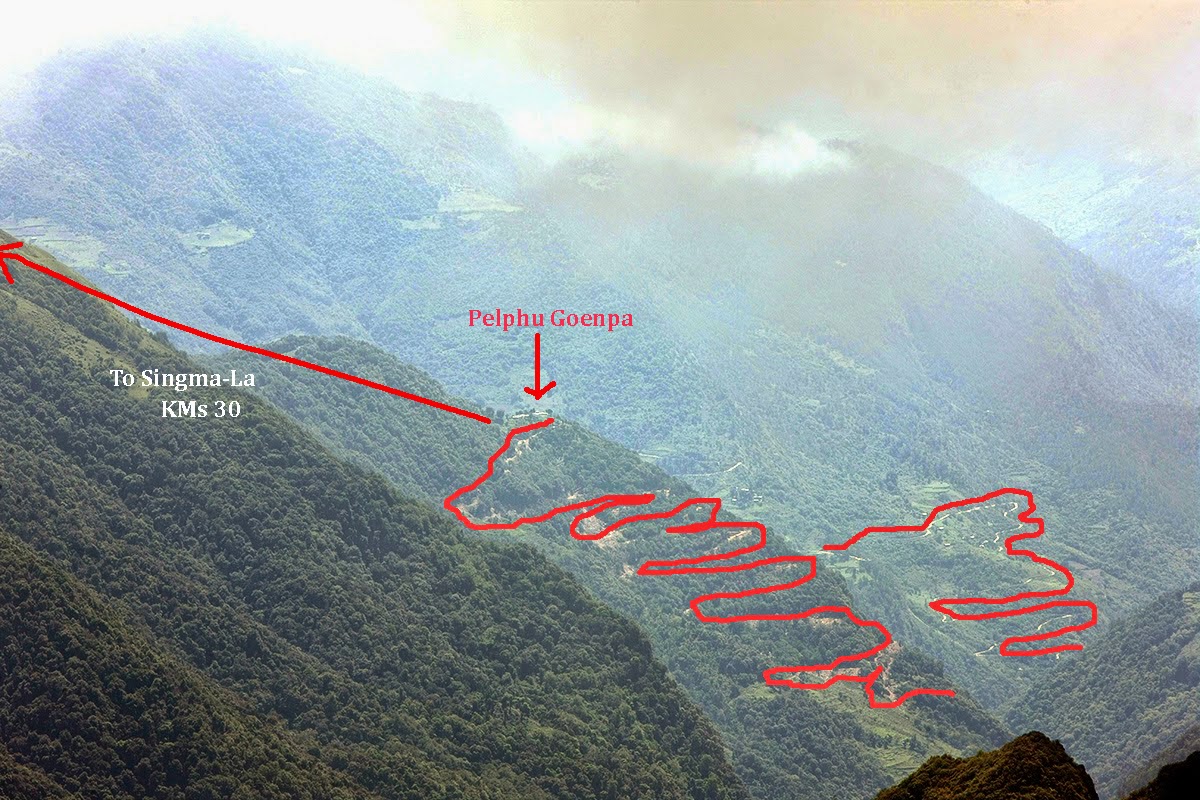 View of the road from Gorgan side that has reached Pelphu Goenpa at which point the erstwhile DPT government had halted further construction. Notice the number of zigs/turns already. The road has to climb further 30 KMs to reach the Singama-La top. One can imagine how many more zigs/turns it will require until the road is able to reach the top of the pass. 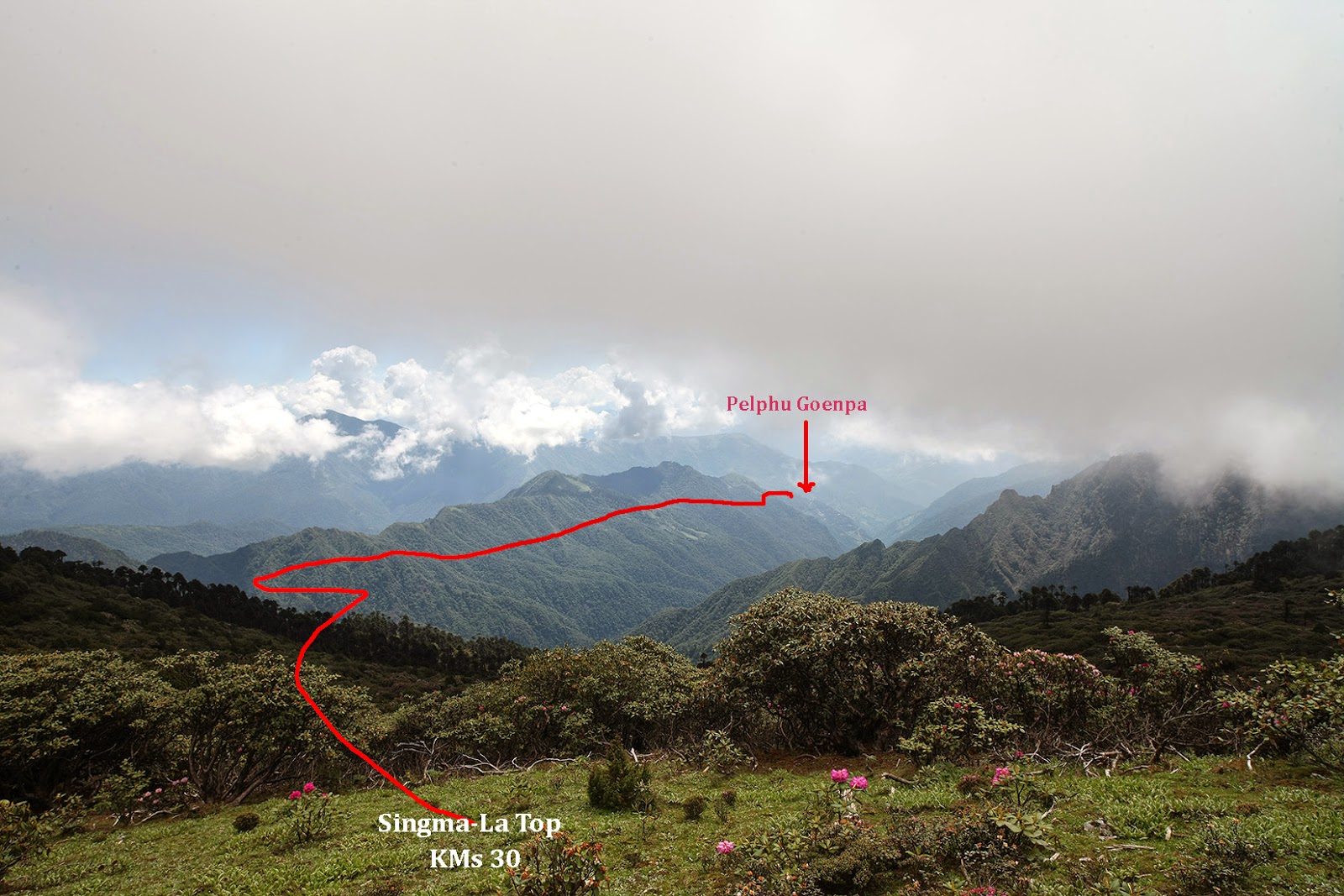 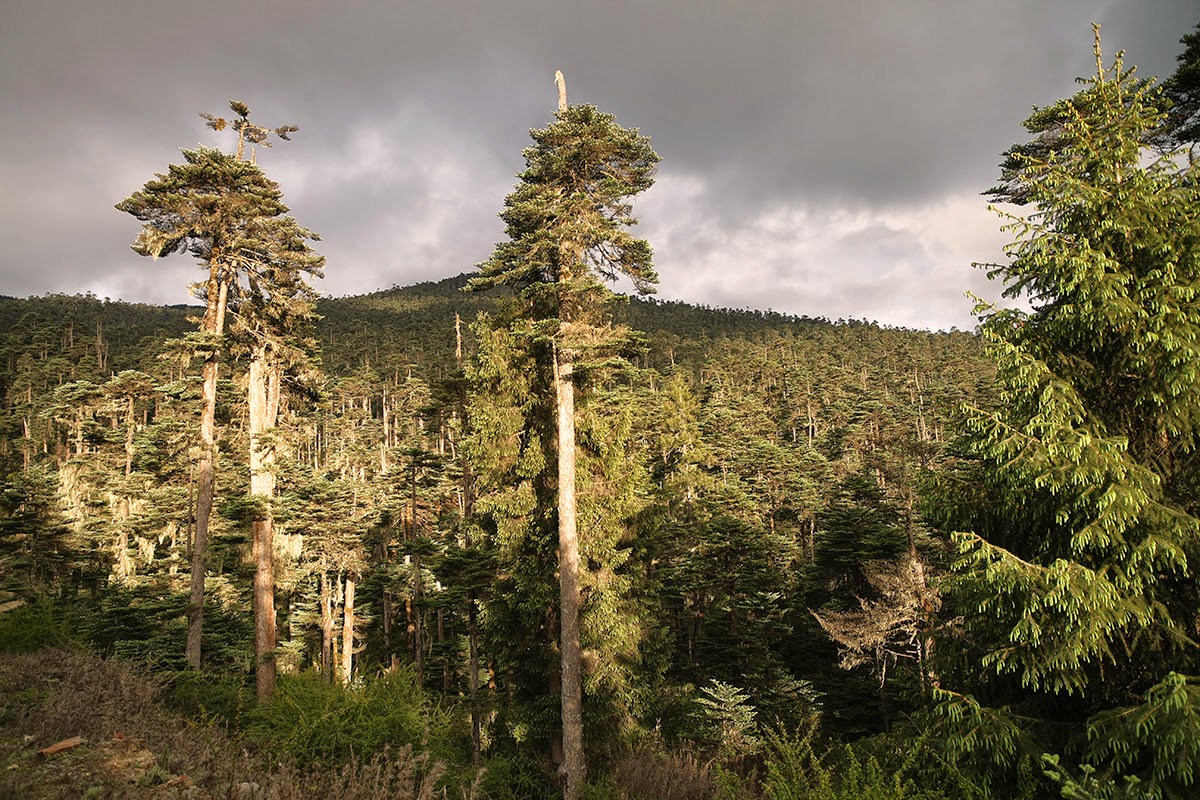 Perhaps Bhutan's oldest forest stand of Silver Fir that will be desecrated if the road gets constructed. 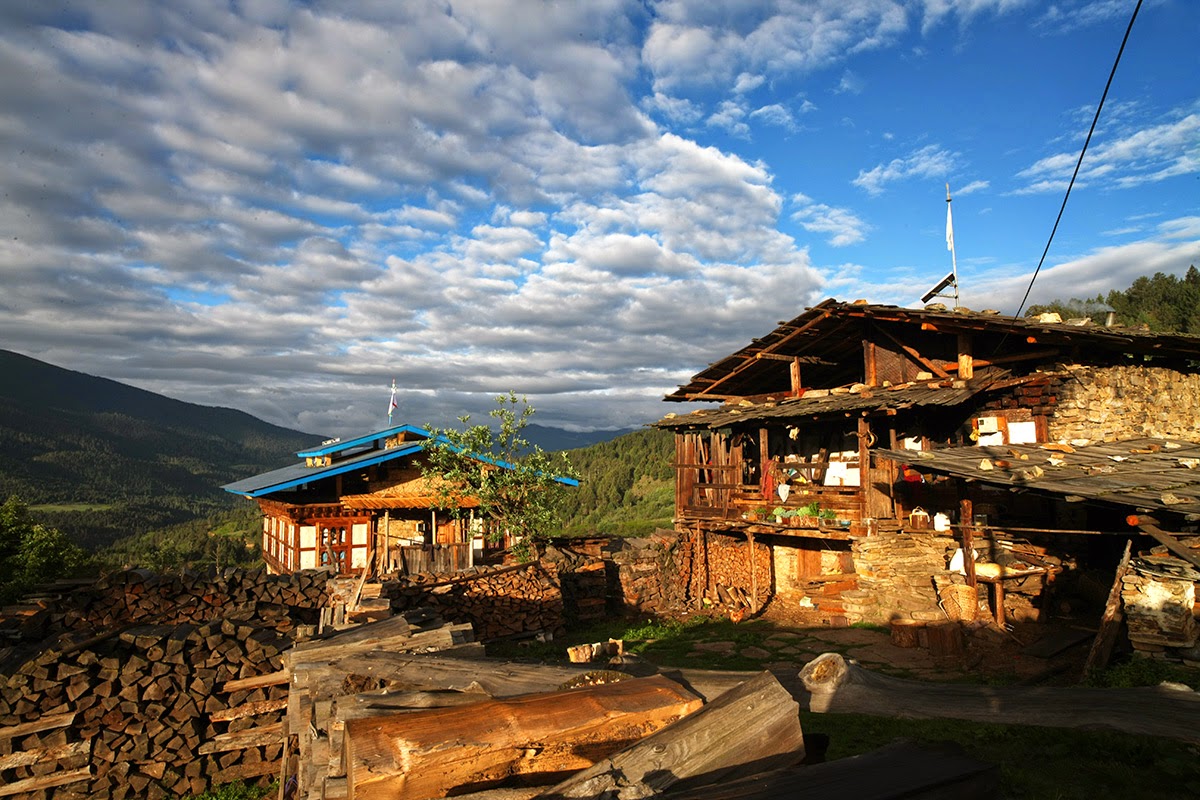 Some pretty houses in Shingkhar.