I never intended to delve into ancient, not even modern, history of Bhutan. I merely wanted to put together an account of Bhutan’s coining journey. Obviously I do want to put out factual accounts and not something that is not the truth. That is when my trouble started – in my attempt to verify and validate some of the written and oral accounts, I began to uncover some seriously impossible narratives and claims that are simply not tenable.

As I went deeper and deeper, another matter came to light – our researchers and historians seem to have treated our history with a level of casualness that is inexcusable. Not many of them seem to agree with each other. One writer even goes to the extent of writing that His Majesty Gongsa Ugyen Wangchuck and his Ministers signed the Treaty of Sinchula in 1865. Another writer says that: "Ugyen Dorji was born in 1855 to Pala Gyaltsen and a lady from Tsendong in the Paro Valley". Gongzim Ugyen Dorji was son of Sharpa Penchung and wife Thinley Om of Paro Tsendo - it is true he was born in Kalimpong in 1855. Yet another account states: “Ugyen Dorji (Gongzim), who was originally from Paro, had migrated years ago to Kalimpong, a hill resort established by the British on land annexed from Bhutan”. Neither Ugyen Dorji migrated to Kalimpong, nor was Kalimpong a British territory during Ugyen Dorji’s early days in Kalimpong.

Truly there is a need for the government to create a Commission comprised of writers and researchers to correct our history. Even our textbooks are rife with inaccuracies and factually incorrect accounts of what happened.

Beginning from my next post on the subject, I am going to try and separate facts from myths. This is a huge responsibility and lot of other more competent writers, researchers and historians need to contribute to clean up the gibberish that currently exists. 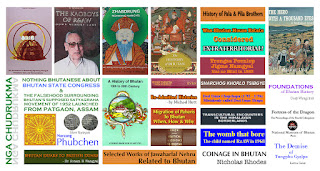 I welcome you to add to my endeavor by pointing out mistakes in my observations. Or even adding or bringing to light what you know is incorrect.