A Most Rare Find!

When one is passionate and dogged in the pursuit of one’s aspirations, it appears that things will eventually fall into place. In trying to put together a book on the coining journey of Bhutan, I have been through thousands of hours of search and research. Thankfully, not all of them have been in vain – in fact some of them have been providential – as if it were preordained. I have stumbled on the most unexpected encounters and discoveries - as if some unseen hand was guiding them my way.

There are many hundreds - perhaps even thousands of coins that are still missing from my collection. But it is not my endeavor to get them all – it is impossible. I just want to be able to include as many verities as possible.

Coins are one thing – but dies are another. They are even more rare and extremely difficult to come by, if at all. Through the writings of a coin historian, I managed to track down and photograph half a die – a reverse die or the hammer die – belonging to Desi Kitshelpa Dorji Namgyel. What I needed was a complete set of dies – both the obverse, as well as the reverse dies - to go into the book so that readers can get to see how coin dies look.

Few months’ back, I came by the information of the existence of a set of coin dies with someone not far from Thimphu. Even more fortuitous, the brother of the person in whose possession the dies were supposed to be happened to be a long time friend of mine. After doggedly chasing the friend for months to introduce me to his brother, he finally relented and, subsequently, yesterday I managed to photograph the set of dies that are presented in the following. I am clueless as to whom the dies belong to - the current owner of the dies do not either. The only thing I can tell you without hesitation is that the die is a fine work of art – the engraving is so exquisite that it is unbelievable that the dies were hand cut during late 1700’s or early 1800’s. It is in mint condition, as you can see below: 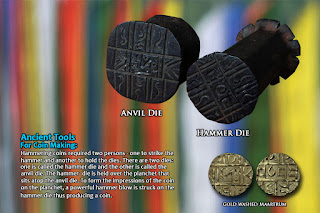 A set of 2 coin dies: The hammer die and the anvil die, accompanied by a gold-washed Maartrum. The complex cascading of colors in the background is provided by the myriad of hues of the dharshings (colored prayer flags) that stand guard over the Chorten in front of the Dechenphodrang Lhakhang in Thimphu.
As is clearly evident, the hammer die has seen many thousands of hammerings – the severely battered butt end of the punch is proof of it. But amazingly the die’s faces are in mint condition – there are no signs of any wear or tear on them.