The late Mr. Nicholas Rhodes is accepted as the world’s most respected authority on coinage in Bhutan. Most writers and historians draw references from his work on the subject. However, he did not get it right when he said that there was no minting beyond Trongsa. The following proves that there was.

One other record that is being set straight by the letter of Jakar Poenlop Tsuendru Gyeltshen is that Trongsa Poenlop Jigme Namgyel did not have a mint of his own in 1863. In all likelihood, Jigme Namgyel’s coins date back to late 1860’s or early 1870’s. This is because there is a record that says that Jigme Namgyel carried away moneyers and coin dies from Cooch Behar in the 1860’s. If that were to be true, it would have had to have happened after 1865 – following the Great Duars war in which he was the principal player. 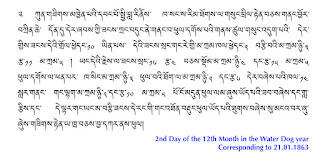 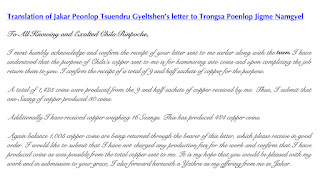 English translation of the letter

Tsuendru Gyeltshen was the son of Trongsa Poenlop Tshoki Dorji and a descendent of Dorji Lingpa. He would have been the title holder of the lineage – but he died in the Duars war of 1865 when he accompanied Trongsa Poenlop Jigme Namgyel. He had no heir - thus, perhaps for the first time in history, the title of the lineage passed on to a lady – Yeshi, Tsuendru Gyeltshen’s sister.

When Trongsa Poenlop Tshoki Dorji passed on the seat of Trongsa Poenlop to Jigme Namgyel for three years, in keeping with a promise made to him for saving his life in Punakha, Tsunedru Gyeltshen was installed as Jakar Dzongpoen in the interim. At the end of the three years beginning 1853, Jigme Namgyel was supposed to surrender the seat of Trongsa Poenlop to Tsuendru Gyeltshen. Unfortunately Jigme Namgyel reneged on his words and refused to relinquish the post. A long drawn war broke out between them. Finally the central government in Punakha intervened and a compromise was reached in which Tsuendru Gyeltshen was promoted to the rank of Jakar Poenlop and the entire Central and Eastern regions of the country collectively known as Sharchok Khorlo Tsipgye was divided into two and came to be ruled equally by the two Poenlops of Trongsa and Jakar.

In later years, Poenlop Tsuendru Gyeltshen and Poenlop Jigme Namgyel buried their differences and became very good friends – to the point that when war was declared by the British on Bhutan that came to be known as the Great Duars War, Tshendru Gyeltshen accompanied Jigme Namgyel to fight the British. He never returned – he was killed in the course of the war.

NOTE III: The accepted norm is that the term ‘Chila’ would be reserved for a ruler who is a learned Lam. According to convention, Jigme Namgyel should have been addressed as ‘Chotse Poenlop’.