Well, this doesn’t really come as a surprise – in my thinking, the regions in the extreme north and east of our country were always at risk. The recent report of active COVID-19 cases in Merak proves it. 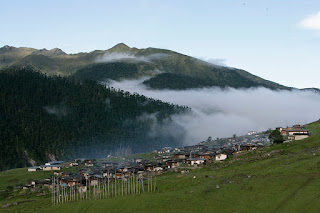 I had already warned last year that there is a need to watch the northern and eastern borders bordering Tibet and Arunachal Pradesh. I gave my reasons in the following:

Detection of COVID-19 cases in the community in Merak should not be considered paranormal but the government should be concerned, particularly for the fact that the village is a closely knit cluster and transmission can be rapid and total. The emergence of cases in Merak should cause us to be wary and give us a reason for surveillance in the following northbound communities that have traditional links with Tibet and Arunachal Pradesh:

Merak and Sakten in Trashigang

Laya and villages in Lunana in Gasa

Perhaps even in the villages in the north of Haa and Paro.

The alluring khandrums in Phari is, if anything, incidental - trade in Yartsa Guenboop across the north is perhaps the most compelling reason for prohibited journeys into Tibet China. Followed by smuggling of gold, sandalwood, US$ cash and counterfeit currencies are likely other reasons. During my trip to the Chundugung/Gonzola areas, some Haaps tried to sell me the nonsense that they were headed into Tibet to carry back jandoms and carpets and cakes of jari. I have to be a prize dullard to believe that they would scale frigid high mountain passes to carry back such high volume, low value merchandize.

Strangely, in Koortoe areas, I was told by a pony driver whom I had hired during my trip to Singye Dzong – that they go into Tibet over the ridge north of Tshokar lake in Singye Dzong – for smuggling color TV’s and cheap footwear and solar powered items of daily use.

We cannot let our guards down in the knowledge that our northern borders are patrolled to prevent incursions by the Tibetans and the Moenpas of Tawang. I am more worried about the incorrigible Bhutanese slithering into Tibet and Tawang/Arunachal Pradesh to sell/buy/trade – in the process pickup a free merchandize we do not need – COVID-19 virus.

Email ThisBlogThis!Share to TwitterShare to FacebookShare to Pinterest
Labels: COVID-19