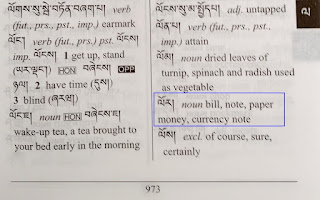 Definition of "Lor" according to the Dictionary

According to the Dictionary, the term “Lor” will accurately describe paper currency,  without the need to add the word “Shog” in front of “Lor”. Thus I am not correct when I say that “Shog Lor” means paper money. Lor by itself means: bill, note, paper money, currency note etc.

There is something insane about the way our monetary units have been called: “Ngueltrum” and “Chettrum”.

“Ngueltrum” is a combination of two words “Nguel” (silver) and “Trum” (coin). It specifically translates to: Silver Coin. Strangely we employ this term to describe our paper money.

“Chettrum” is also a combination of two words: “Chet” (half) and “Trum” (coin) – collectively meaning: half coin. I believe that the term was coined during the time of the issue of our first modern milled silver coin – the Silver Thala of 1929. The reverse of the coin is inscribed with the words “Sa Druk Lo Ja Trum Chet”. The words translate to: “In the Year of Earth Dragon Half Indian Coin”. It could be argued that “Ja Trum Chet” could mean “half of hundred”. But remember that those days we did not have monetary denominations of Nu. and CH – so it could not have meant that Thala was half a Ngueltrum. 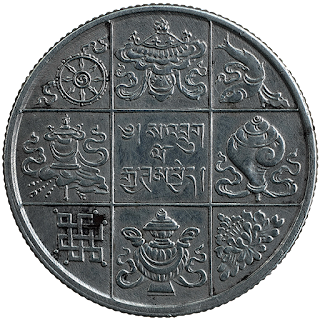 Reverse of the extremely rare silver Thala of 1929

I have been calling for the correction of our monetary units – but who cares?